Goddard Team Pushes Technology
Have you ever noticed how some things just keep getting smaller and smaller? Take for example our cell phones or personal computers. Just a few years ago it would have been impossible to conveniently tuck a cell phone away in a pocket or carry around a computer that weighs less than 5 lbs. Well, Goddard’s Space Technology 5 (ST5) Project/Code 495 is building and testing that miniaturization concept with three small satellites. 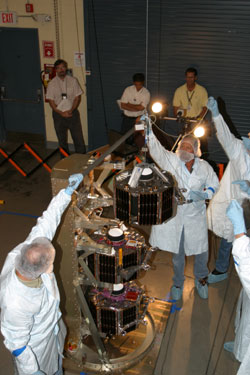 Image to right: Test deployment of 1 of the 3 ST5 spacecraft. Other two spacecraft are still mounted to the Pegasus Support Structure.

These satellites, also known as micro-sats, will test and validate new technologies and aid scientists in understanding the harsh environment of the Earth's magnetosphere. Building and testing of all three micro-sats is underway in the Building 29 complex. The first of the three micro-sats has successfully completed all environmental testing and is supporting operational training. Environmental testing of micro-sat two and three is underway with thermal vacuum testing scheduled to begin in August.

Miniaturized components and technologies are being integrated in to each of the micro-sats. Each micro-sat weighs approximately 25 kilograms (55 pounds) when fully fueled and resemble a very large birthday cake at 53 centimeters (20.7 inches) across and 48 centimeters (18.7 inches) high. The three ST5 spacecraft will be launched using a Pegasus XL rocket and spun into a near-Earth polar elliptical orbit approximately 300 kilometers (190 miles) X 4,500 kilometers (2,800 miles).

On schedule to launch from Vandenberg Air Force Base (VAFB) in late February 2006, ST5 has a mission duration of 90 days. “We are at a very exciting phase of the project with all three spacecraft assembled and under test. The entire ST5 team is looking forward to launch,” said Doug McLennan, ST5 Project Manager.

Although small in size compared to their counterparts, each of these satellites is considered "full service," meaning they contain avionics with capabilities comparable to what is seen on spacecraft that are much larger. Each ST5 micro-sat will validate New Millennium Program (NMP) technologies such as the Cold Gas Mirco-Thruster (CGMT), X-Band Transponder Communication System, Variable Emittance Coatings for Thermal Control, and CMOS Ultra-Low Power Radiation Tolerant (CULPRiT) Logic.

Another feature resulting from the miniaturized size and reduced weight is the ability to launch multiple micro-sats from a low-cost Pegasus XL rocket. The ST5 Project designed, fabricated and tested a new innovative Pegasus launch rack that supports three micro-sats in a “stacked” configuration. By utilizing this type of multi-rack design, each micro-sat will be individually deployed in a spinning (Frisbee-like) motion.

After deployment, each of the micro-sats will be positioned in a “string of pearls” constellation that demonstrates the ability to spatially configure each micro-sat to perform simultaneous multi-point measurements of the magnetic field using a highly sensitive magnetometer. Using data collected from the ST5 constellation, scientists can begin to understand and map the intensity and direction of the magnetic field, its relation to space weather events and the effects on our planet. With the help of pathfinder missions such as ST5, NASA hopes that in the future, scientists will be able to accurately forecast space weather and thereby minimize its harmful effects on space and ground based systems.

The ST5 Project is an instrumental part of NMP. NMP was created to identify, develop, build, and test innovative technologies and concepts for infusion into future missions. To determine the future capabilities needed, NMP is guided by NASA's Earth and Space Science "roadmaps." These roadmaps lay out the path of future scientific enquiry. They serve not only as a vital guide for NMP's selection of technologies, but are used to conceive and design the program's test missions as well.

Small, inexpensive, yet highly capable micro-sats are instrumental in the validation of new miniaturized components that will help pave the way for flying tens to hundreds of micro-sats in future missions.

For more information on ST5: http://nmp.jpl.nasa.gov/st5/