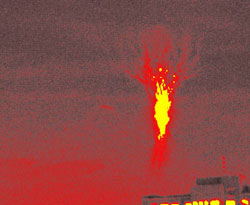 Giant red blobs, picket fences, upward branching carrots, and tentacled octopi - these are just a few of the phrases used to describe sprites - spectacular, eerie flashes of colored light high above the tops of powerful thunderstorms that can travel up to 50 miles high in the atmosphere.

Sprites, so-named by a University of Alaska scientist inspired by the creatures in Shakespeare's "The Tempest," have been observed since the 1800s, though rarely visible from the ground. Aircraft pilots began reporting sightings of sprites in the 1950s and '60s, but they were not formally identified until 1989 when the Space Shuttle (STS-34) recorded the flashes as it passed over a thunderstorm in northern Australia. While many theories have been offered on the cause of this rare phenomenon, new NASA-funded research is settling the mystery and helping to determine the driving force behind these marvel displays of light.

Now, a study led by Steven Cummer of Duke University, Durham, N.C. and Walter Lyons of FMA Research, Inc., Fort Collins, Colo. has found more evidence that sprites are generated by major lightning strikes. They also found the total charge, as it moves from the cloud to the ground, and multiplied by that distance, known as the "lightning charge moment," is most critical in the sprite's development. The study appeared in the April 2005 issue of Journal of Geophysical Research-Space Physics. 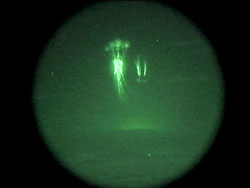 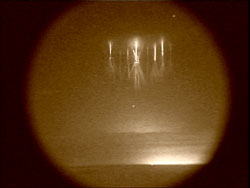 The nature of the charge does appear to make a difference, however, as sprites are very rarely created by negatively charged cloud-to-ground lightning strikes, probably because big negative strokes occur infrequently over the typical breeding ground for sprites in the U.S. High Plains.

Sprites, like lightning strokes, are largely unpredictable and brief - lasting only 3 to 10 milliseconds and inherently difficult to study. But, the technique used in this study also proved that "a single sensor can monitor moment change in lightning strikes over a very large area, providing a reasonable way of estimating how often sprites occur globally," said Cummer. Much research to date has instead relied on the strategic placement of multiple low light video cameras.

Sprites and other phenomena, including elves - that bring a millisecond flash of light that fills the entire night sky within a 100 kilometer (62 mile) radius of the associated lightning strike - are generating much interest because of their strong electric fields and electromagnetic pulses that may interact with the Earth's ionosphere and magnetosphere.

Some of the most recent research has shown that some lightning strikes might be associated with terrestrial gamma-ray flashes (TGFs), intense explosions of gamma rays lasting only about one millisecond that are emitted into space from the upper atmosphere. Scientists believe electrons traveling at nearly the speed of light scatter off atoms and decelerate just above thunderclouds, emitting TGFs. While many questions remain today, future technology will certainly allow for even more precise detection of these events, giving scientists valuable insight into their origins.