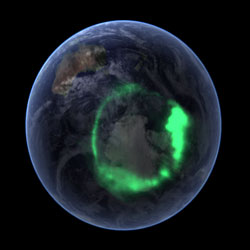 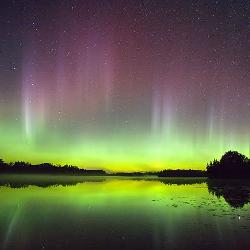 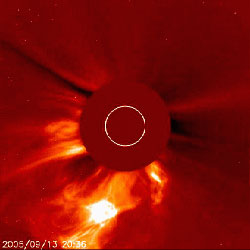 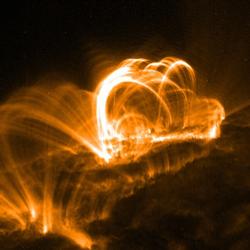 + Another view of the aurora from Chris Gray in Moosehorn Dist. MB Canada on Sept. 12

A coronal mass ejection (CME) hit Earth's magnetic field on Sept. 15, but it did not spark the strong display of auroras many people were hoping to see. In the CME's wake, however, a fast solar wind stream is blowing past Earth and buffeting our planet's magnetic field. This could cause mild geomagnetic storms. Sky watchers in Canada and Alaska should remain alert for auroras tonight. Since Sept. 7, this one sunspot, AR 798, produced nine X-class flares, the most powerful classification. In fact, it has made September 2005 the most active month on the sun since March 1991 and the Sept. 7 record-setting X-17 flare was the fifth largest ever observed.

With the exception of brief radio blackouts, the flares have had little effect on Earth, although the NOAA Space Environment Center warns that as the spot continues to rotate toward Earth, agencies impacted by space weather storms may experience disruptions over the next two weeks. These include spacecraft operators, electric power systems, high frequency communications, and low-frequency navigation systems.

This sunspot is the same one that erupted in mid-August, sparking strong auroras as far south as Utah and Colorado. Over the past two weeks, the active region produced a series of significant solar eruptions as it made its way around the back-side of the Sun (facing away from Earth). Auroras were spotted over the weekend in unusual places like New York, Pennsylvania, and New Hampshire.

Solar flares and coronal mass ejections (CMEs) -- associated giant clouds of plasma in space -- are the largest explosions in the solar system and can pack the force of a billion megaton nuclear bombs. They are caused by the buildup and sudden release of magnetic stress in the solar atmosphere above the giant magnetic poles we see as sunspots.

The aurora, also known as the Northern and Southern Lights, form when solar particles and magnetic fields pump energy into the Earth's magnetic field, accelerating electrically charged particles trapped within. The high-speed particles crash into Earth's upper atmosphere (ionosphere) over the polar regions, causing the atmosphere to emit a ghostly, multicolored glow. Click here to download a movie showing this process (10.2 MB)

Dramatic solar activity is getting increasingly rare as we enter into the quiet period of the Sun's eleven-year cycle of activity. The years 2000-2001 marked the highest point of activity, but that doesn't preclude the occasional surprise like last week's CMEs.