Remote sensing is the science of getting information about the Earth's land and water areas from images taken at a distance, such as by plane or satellite. It usually relies on the measurement of energy reflected by or given off from objects.

The awards were presented to Jeff Dozier, a preeminent researcher in snow hydrology and the remote sensing of snow properties, and John R. G. Townshend, who has had a profound influence on the advancement of remote sensing for the study of global land characteristics.

Sponsored jointly by NASA and the DOI, the award recognizes outstanding contributions to the understanding of the Earth by means of remote sensing. It has been presented annually since 1974 in memory of Dr. William T. Pecora, whose early vision and support helped establish what we know today as the Landsat satellite program. Pecora was director of the USGS from 1965-71, and he later served as undersecretary of the DOI, until his death in 1972.

Dr. Jeff Dozier’s research and teaching interests lay in the fields of snow hydrology, Earth system science, remote sensing and information systems. He has pioneered studies in two areas: one involves the hydrology, hydrochemistry, and remote sensing of mountainous drainage basins; the other is in integrating environmental science with computer science and technology. Dozier founded the University of California, Santa Barbara, Donald Bren School of Environmental Science & Management. For six years he served as its first Dean.

Dozier was the senior project scientist for NASA’s Earth Observing System in its formative stages, when the configuration of the system was established. He helped found the MEDEA group, which investigates the use of classified data for environmental research, monitoring, and assessment. Dozier received his B.A. from California State University, Hayward, in 1968 and his Ph.D. from the University of Michigan in 1973. He has been a faculty member at UCSB since 1974. He is a Fellow of the American Geophysical Union, the American Association for the Advancement of Science, and the National Institute for Environmental eScience, UK. He is also an Honorary Professor of the Chinese Academy of Sciences, a recipient of the NASA Public Service Medal and a Schneebaum Lecturer at Goddard Space Flight Center.

John R. G. Townshend received his Bachelor of Science degree in 1967 and his Ph.D. in 1971 from the University College London, UK. He is a professor at the University of Maryland, College Park, where he holds joint appointments in the Department of Geography and the Institute for Advanced Computing Studies. He currently is chair of the Committee of the Whole of the Earth System Information Partnership, a member of the National Research Council's Board on the Earth Sciences and Resources, and chairs the Advisory Committee of the United Nation's Environmental Programme's GRID facility at the EROS Data Center.

Townshend has done work with NASA’s Moderate Imaging Spectroradiometer (MODIS) instrument that flies aboard NASA’s Terra and Aqua satellites. He has been a member of the MODIS Science Team since 1996.

Townshend’s area of expertise with MODIS centers on enhanced land cover and land cover change products. The University of Maryland has developed two operational MODIS products. The first, Vegetative Cover Conversion, can identify changes in vegetative cover at a resolution of 250 meters (273 yards). The intent is to identify changes such as deforestation, open land converted to forest, agricultural expansion, urbanization, and dramatic natural change events such as flooding and fire. This will allow the examination of how vegetation cover changes over time and space. 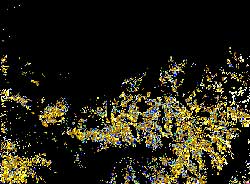 The Pecora award was presented to both scientists at a recent ceremony in Sioux Falls, S.D.