Sea Ice May Be on Increase in the Antarctic: A Phenomenon Due to a Lot of 'Hot Air'?
A new NASA-funded study finds that predicted increases in precipitation due to warmer air temperatures from greenhouse gas emissions may actually increase sea ice volume in the Antarctic’s Southern Ocean. This adds new evidence of potential asymmetry between the two poles, and may be an indication that climate change processes may have different impact on different areas of the globe. 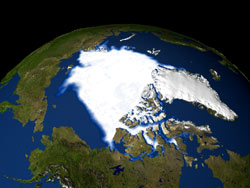 Image to right: Example of North Pole Sea Ice Decrease: This image shows that sea ice in the North Pole has been on the decline, with the most significant loss in the past three years. This occurrence runs counter to the paper’s new finding that sea ice in the Antarctic’s (or South Pole) Southern Ocean appears to be on the increase. Click on image to view animation (no audio). Credit: NASA

"Most people have heard of climate change and how rising air temperatures are melting glaciers and sea ice in the Arctic," said Dylan C. Powell, co-author of the paper and a doctoral candidate at the University of Maryland-Baltimore County. "However, findings from our simulations suggest a counterintuitive phenomenon. Some of the melt in the Arctic may be offset by increases in sea ice volume in the Antarctic.

Image to left: Arctic Sea Ice: The image is that of a multi-year sea ice in the Arctic's (or North Pole) Beaufort Sea. Sea ice around the world combined covers an area as large as the United States, and has been found in the paper to possibly be on the increase. Credit: NOAA

"On any given day, sea ice cover in the oceans of the polar regions is about the size of the U.S.," said Thorsten Markus, co-author of the paper and a research scientist at NASA’s Goddard Space Flight Center, Greenbelt, Md. "Far-flung locations like the Arctic and Antarctic actually impact our temperature and climate where we live and work on a daily basis."

According to Markus, the impact of the northernmost and southernmost parts on Earth on climate in other parts of the globe can be explained by thermohaline circulation – the movement of ocean water that is caused by temperature and salinity variations in the ocean. Through this process, ocean circulation acts like a heat pump and determines our climate to a great extent. The deep and bottom water masses of the oceans make contact with the atmosphere only at high latitudes near or at the poles. In the polar regions, the water cools down and releases its salt upon freezing, a process that also makes the water heavier. The cooler, salty, water then sinks down and cycles back towards the equator. The water is then replaced by warmer water from low and moderate latitudes, and the process then begins again. 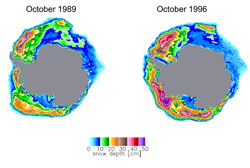 Image to right: Antarctic Snow Depth on Sea Ice: Antarctic snow depth on sea ice derived from satellite passive microwave data for October 1989 and 1996. Maps like these were assimilated into the model. On the color bar, blue and green are the smaller amounts of snow depth, while red and purple indicate highest snow amounts. Click on image to expand. Credit: NASA

Typically, warming of the climate leads to increased melting rates of sea ice cover and increased precipitation rates. However, in the Southern Ocean, with increased precipitation rates and deeper snow, the additional load of snow becomes so heavy that it pushes the Antarctic sea ice below sea level. This results in even more and even thicker sea ice when the snow refreezes as more ice. Therefore, the paper indicates that some climate processes, like warmer air temperatures increasing the amount of sea ice, may go against what we would normally believe would occur.

"We used computer-generated simulations to get this research result. I hope that in the future we’ll be able to verify this result with real data through a long-term ice thickness measurement campaign," said Powell. "Our goal as scientists is to collect hard data to verify what the computer model is telling us. It will be critical to know for certain whether average sea ice thickness is indeed increasing in the Antarctic as our model indicates, and to determine what environmental factors are spurring this apparent phenomenon."

Achim Stossel of the Department of Oceanography at Texas A&M University, College Station, Tex., a third co-author on this paper, advises that "while numerical models have improved considerably over the last two decades, seemingly minor processes like the snow-to-ice conversion still need to be better incorporated in models as they can have a significant impact on the results and therefore on climate predictions."