Heavy Rains Can Make More Dust in Earth's Driest Spots
Typically we think of rainfall as cleaning the air by removing dust as it falls through the atmosphere and helping plants grow that protect and hold the soil. But a new NASA-funded study looking at some of the world's dustiest areas shows that heavy downpours can eventually lead to more dust being released into the atmosphere. 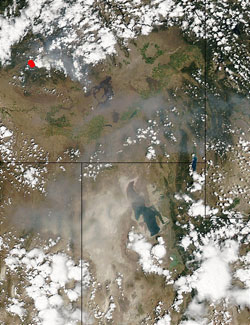 Typically drought reduces vegetation growth, increasing soil vulnerability to wind erosion, while rainfall tends to have the opposite effect. In the new study researchers examining 14 of the Earth's dustiest regions found that in some regions, heavy rainfall and flooding leave behind sediments that include fine grain size particles that eventually get carried by winds in successive dry periods, increasing the amount of airborne dust, or emissions, released a year or more later. This is especially common in the Tigris-Euphrates Basin and in the Zone of Chotts in North Africa.

The research also confirms that dust emissions from a specific region can vary considerably from season-to-season, or year to year, and are largely dependent on climate patterns.

In some regions, "like in Oman and Saudi Arabia, where heavy rains combine with monsoon-driven winds, precipitation has a more immediate impact and appears to erode the surface crust, or top layer of soil, increasing dust emissions within just a few weeks," said Charles Zender of the Department of Earth System Science, University of California-Irvine, and lead author of the study. 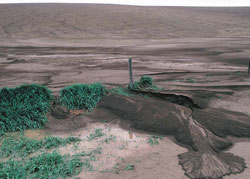 Other areas of the world, including the western United States, the Great Salt Lake in Utah, eastern Sahel in Africa, and Lake Eyre basin Australia, show a more typical response, as precipitation and vegetation lessens the amount of dust released into the atmosphere. In these regions, rain and ground water help form soil layers that diminish the ability of wind to erode and carry soil particles.

Tiny dust particles have a significant influence on climate and weather patterns around the world by reflecting and absorbing sunlight and by serving as a nucleus or surface for water vapor, so that clouds can grow and form precipitation. 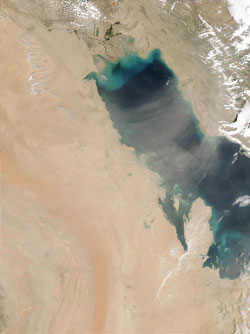 Overall, in the 14 source regions studied, anomalies in dust emissions were closely related to precipitation in 12, vegetation in eight, and to wind speed in two, suggesting that rainfall is the best climate predictor of dust emissions. But other factors, including land features, elevation, the availability of loose sediments, and local distribution of water under the Earth's surface also greatly affect dust emission.

"This study highlights the importance of soil characteristics in dust emission and shows their influence to be more prevalent than previously believed," said Zender. For instance, some soils may lack free sand-sized particles to initiate dust production, like in the Lake Eyre Basin of Australia. Other areas have soils consisting largely of clay that naturally produce less dust, while some soils may be full of sediments perfect for dust production, but are so hard and crusted that none of the particles can escape to produce dust.

While these and other factors are somewhat represented in today's computer models, "they don't adequately account for the formation and destruction of surface soils and how sediment supply for dust production varies from region to region," said Zender. "They also underestimate the monthly to yearly variations in dust production and its associated climate impacts."

Image above: This series of images from NASA's Total Ozone Mapping Spectrometer (TOMS) shows a dust plume over the Sahara Desert extending over the Atlantic Ocean and Canary Islands. Green and red show areas with the greatest amount of dust, while blue areas are relatively free of dust. Credit: NASA GSFC

Future computer models that address these issues will allow scientists to better predict dust production in both the short- and long-term. Such improvements are important because dust emissions have a wide impact on climate and weather, from modifying rainfall thousands of miles away, to influencing hurricane intensity and affecting air quality.

The study was published online in July 2005 in the Journal of Geophysical Research-Atmospheres.