How One Night in a Field Changed Astronomy
Fifty years ago, scientists Bernard Burke and Kenneth Franklin mistook radio signals from Jupiter for a Maryland farmhand driving home after a late date.

It was an easy mistake to make back in 1955 as they set out to map the northern sky using a radio astronomy array in the middle of a rural 96-acre field about 20 miles northwest of Washington, D.C. Before that fateful night, astronomers had never picked up radio signals from any other planet besides Earth. 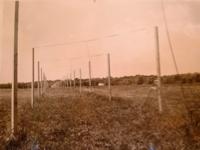 Image Right: A view along one end of the array. The receivers were housed in an Army surplus truck visible in the distance. Photo circa 1954. Credit: Carnegie Institution of Washington

Testing the array and moving in a southern direction, the two detected bursts of interference. After analyzing the data, they realized that the interference occurred about four minutes earlier each night over several months. Comparing this with other celestial objects moving across the sky, they realized that they had actually been listening to Jupiter. And in fact when other scientists looked back into their records for signals from Jupiter, they found discarded data as far back as five years.

"Our identification of Jupiter as a radio source is not based directly on reasoning, but more on luck," Franklin, a scientist at the Carnegie Institution of Washington, later recounted. 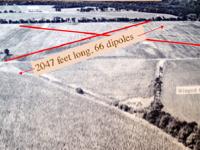 Image Left: Aerial view of the Mills Cross antenna array in Seneca, Md. The X-shaped array used 64 pairs of unpainted wooden poles with wire stretched across the top to act as one large observatory; to study other directions of the sky, scientists altered the length of the cable between antennas. Click on image for larger version or download alternate image without graphics. Credit: Carnegie Institution of Washington.

To get a better idea of what they were hearing, Burke and Franklin compared their new data with what scientists already knew about Jupiter. They realized that the radio bursts matched up with the rotation rate of Jupiter. Scientists had started to understand Jupiter's rotation rate by watching the cloud patterns move across the planet. By listening to the radio bursts, they were able to improve on that information, determining that the planet rotates once in about 10 hours -- more than twice as fast as Earth.

Image Right: Voyagers 1 and 2 passed by Jupiter in 1979. By studying the planet using radio waves, scientists also discovered that Jupiter has a magnetic field and also learned about its moons. The more we learn about Jupiter and its environment, the better we understand Earth, which also emits radio waves. Credit: NASA

So what does Jupiter sound like? It actually produces a wide range of bursts with different sounds. The most common, called L-bursts, last from a few tenths of a second to several seconds and sound like ocean waves breaking up on a beach. The shorter bursts, known as S-bursts, last a few thousandths to a few hundredths of a second and sound more like popcorn popping or like a handful of pebbles thrown onto a tin roof. Both the University of Florida and the Windward Community College in Hawaii put audible versions online. Nearly all of the planets in our solar system have magnetic fields but Jupiter's is much stronger and closer, making it the only planet scientists can study from the ground in the radio range.

When Burke and Franklin realized the planets emitted radio waves, the field of radio astronomy was about 20 years old and primarily studied the composition, structure, and motion of stars, galaxies, and comets. In fact because radio astronomy has advantages that other forms don't -- namely that it's unaffected by sunlight, clouds, and rain -- it's still an important way of making observations. Sometimes, the radio waves are beamed in a particular direction like a spotlight. In this case, the radio waves appeared every 10 hours, which was close to the known rotation rate of Jupiter.

Image Above: Radio astronomy measures the characteristics of radio waves emitted by stars and other celestial phenomena. It led to the discovery of several classes of new objects, including pulsars and quasars. Credit: NASA

"Radio astronomers were studying the Sun and the Milky Way galaxy -- this discovery opened a whole new class of objects to study. Suddenly we realized we could start to learn about planets too... By studying Jupiter and its magnetic fields, we also made discoveries about the Earth and Earth's environment," said Dr. Jim Thieman of the NASA Goddard Space Flight Center. You can read more about other Jupiter discoveries or see Jupiter.

Beside various arrays scattered around the world like the Very Large Array (VLA) in New Mexico, which is roughly one and a half times the size of Washington, DC, spacecraft also carry radio astronomy experiments. The Voyager probes studied four planets and had a radio instrument, as does Cassini, currently studying Saturn and its moons. "They're the children of this discovery," said Dr. Leonard Garcia, a radio astronomer at NASA Goddard Space Flight Center.

To commemorate the discovery, the Maryland Historical Trust placed a roadside marker along River Road near the former Seneca Observatory in April. It reads: "In 1955 scientists Bernard Burke and Kenneth Franklin from the Carnegie Institution of Washington accidentally discovered naturally-generated radio waves from Jupiter using a 96-acre antenna array. This discovery led to greater understanding of planetary magnetic fields and plasmas and opened a new window in our exploration of the solar system."

In 1958 Franklin more aptly put the experience into perspective. "There is no more thrilling experience for a man than to be able to state that he has learned something no other person in the world has ever known before him," Franklin said. "I have been lucky enough to be included in such an event."