Keeping New York City "Cool" is the Job of NASA's "Heat Seekers"
The "heat is on" in New York City, whether it’s summer or winter. This is due to a phenomenon called the urban heat island effect that causes air temperatures in New York City and other major cities to be warmer than in neighboring suburbs and rural areas. And, in a big city, warmer air temperatures can impact air quality, public health and the demand for energy.

Image to right: A thermal satellite image of New York City captured by NASA’s Landsat satellite on August 14, 2002 at 10:30 a.m., shows the locations of the warmest air temperatures as seen in red. The blue indicates areas with cooler air temperatures. Click on image to enlarge. Credit: NASA

Recently, several innovative approaches developed by scientists, public officials, environmental activists, community organizations and others have been put in place to take a bite out of the Big Apple's temperature problem. NASA researchers, using NASA satellite observations, weather pattern data and computer models, have recently assessed how well those strategies are working. Their study results will be discussed during the 2006 American Meteorological Society’s annual meeting in Atlanta, Ga., Jan. 29 through Feb. 2.

"We need to help public officials find the most successful ways to reduce the heat island effect in New York. With ever-increasing urban populations around the world, the heat island effect will become even more significant in the future," said Stuart Gaffin, an associate research scientist at Columbia University, New York, and a co-author of the new NASA study. "The summertime impacts are especially intense with the deterioration of air quality, because higher air temperatures increase ozone. That has health effects for everyone. We also run an increased risk of major heat waves and blackouts as the heat island effect raises demand for electricity."

In cities, the urban heat island effect is caused by the large number of buildings, sidewalks and other non-natural surfaces that limit the amount of land covered with vegetation like grass and trees. Land surfaces with vegetation offer high moisture levels that cool the air when the moisture evaporates from soil and plants.

In large cities, land surfaces with vegetation are relatively few and are replaced by non-reflective, water-resistant surfaces such as asphalt, tar and building materials that absorb most of the sun's radiation. These surfaces hinder the natural cooling that would otherwise take effect with the evaporation of moisture from surfaces with vegetation. The urban heat island occurrence is particularly pronounced during summer heat waves and at night when wind speeds are low and sea breezes are light. During these times, New York City's air temperatures can rise 7.2 degrees F higher than in surrounding areas.

In the recent project, NASA researchers set out to recommend ways to reduce the urban heat island effect in New York City. They looked at strategies such as promoting light-colored surfaces such as roofs and pavements that reflect sunlight, planting "urban forests" and creating "living roofs" on top of buildings where sturdy vegetation can be planted and thrive. Using a regional climate computer model, the researchers wanted to calculate how these strategies lower the city’s surface and close-to-surface air temperatures and what the consequences of these strategies would be on New York's energy system, air quality and the health of its residents. 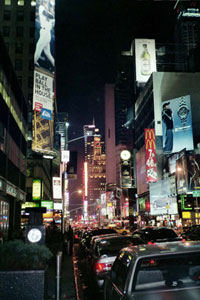 The researchers conducted a city-wide case study over the summer of 2002 to measure changes in air temperatures. They also used six smaller case studies during the same period in places like Lower Manhattan, the Bronx's Fordham section, Brooklyn's Crown Heights section and the Maspeth section of Queens. The areas were chosen for the different ways land is used and their nearness to areas with high electrical use. They also had warmer-than-average near-surface air temperatures called "hot spots" and boasted available spaces to test ways to reduce the urban heat island effect.

"We found that vegetation is a powerful cooling mechanism. It appears to be the most effective tool to reduce surface temperatures," Gaffin said. "Another effective approach is a man-made approach to cooling by making very bright, high albedo, or reflected light, on roof tops. These light-colored surfaces, best made using white coatings, reflect the sun's light and thereby, its heat. Interestingly, more area is available to create the lighter surfaces than to add vegetation in a city such as New York."