Dying Star Reveals More Evidence for New Kind of Black Hole
Scientists using NASA's Rossi X-ray Timing Explorer have found a doomed star orbiting what appears to be a medium-sized black hole – a theorized "in-between" category of black hole that has eluded confirmation and frustrated scientists for more than a decade.

Image above: NASA's Chandra X-ray Observatory captured this image of the central region of the starburst galaxy M82. From 1999-2000, this source was seen by Chandra to increase dramatically in intensity over a period of three months (compare right and left panels), an indication of black hole activity. With NASA's Rossi Explorer, a team led by Philip Kaaret has found evidence of a star (too small to be imaged) orbiting around the suspected black hole, called M82 X-1. This may confirm that M82 X-1 is part of a new "in-between" category called intermediate-mass black holes. Credit: NASA/SAO/CXC + High resolution images Credit: NASA/SAO/CXC

With the discovery of the star and its orbital period, scientists are now one step away from measuring the mass of such a black hole, a step which would help verify its existence. The star's period and location already fit into the main theory of how these black holes could form.

A team led by Prof. Philip Kaaret of the University of Iowa, Iowa City, announced these results today in Science Express. The results will also appear in the Jan. 27 issue of Science.

"We caught this otherwise ordinary star in a unique stage in its evolution, toward the end of its life when it has bloated into a red giant phase," said Kaaret. "As a result, gas from the star is spilling into the black hole, causing the whole region to light up. This is a well-studied region of the sky, and we spotted the star with a little luck and a lot of perseverance."

A black hole is an object so dense and with a gravitational force so intense that nothing, not even light, can escape its pull once within its boundary. A black hole region becomes visible when matter falls toward it and heats to high temperatures. This light is emitted before the matter crosses the border, called the event horizon. 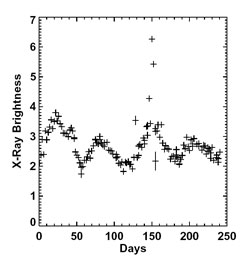 Our galaxy is filled with millions of stellar-mass black holes, each with the mass of a few suns. These form from the collapse of very massive stars. Most galaxies possess at their core a supermassive black hole, containing the mass of millions to billions of suns confined to a region no larger than our solar system. Scientists do not know how these form, but it likely entails the collapse of enormous quantities of primordial gas.

"In the past decade, several satellites have found evidence of a new class of black holes, which could be between 100 and 10,000 solar masses," said Dr. Jean Swank, Rossi Explorer project scientist at NASA’s Goddard Space Flight Center, Greenbelt, Md. "There has been debate about the masses and how these black holes would form. Rossi has provided major new insight."

These suspected mid-mass black holes are called ultra-luminous X-ray objects because they are bright sources of X-rays. In fact, most of these black hole mass estimates have been based solely on a calculation of how strong a gravitational pull is needed to produce light of a given intensity.

Kaaret's group at the University of Iowa, which includes Prof. Cornelia Lang and Melanie Simet, an undergraduate, made a measurement that can be used in the equation to directly calculate mass. Using straightforward Newtonian physics, scientists can calculate an object's mass once they know an orbital period and velocity of smaller objects rotating around it.

"We found a rise and fall in X-ray light every 62 days, likely caused by the orbit of the companion star around the black hole," said Simet. “The velocity will be hard to determine, however, because the star is located in such a dust-obscured area. This makes it hard for optical and infrared telescopes to observe the star and make velocity calculations. Yet for now, knowing just the orbital period is very revealing.”

The suspected mid-mass black hole, known as M82 X-1, is a well-studied ultra-luminous X-ray object in a nearby star cluster containing about a million stars packed into a region only about 100 light years across. A leading theory proposes that a multitude of star collisions over a short period in a crowded region will create a short-lived gigantic star that collapses into a 1,000-solar-mass black hole. The cluster near M82 X-1 has a high-enough density to form such a black hole. No normal companion could provide enough fuel to make M82 X-1 shine so brightly. But the 62-day orbital period implies that the companion must have a very low density. This fits the scenario of a bloated super-giant star losing mass at a rate high enough to fuel M82 X-1.