Hidden Star Feeds on Neighbor, Burps, Gets Found
A "cloaked" star was discovered after it ate a little of its neighbor. The meal must have given the star a bit of indigestion, because it "burped" with a blast of high-energy radiation, which gave it away. Still, it took astronomical detective work by an international team of scientists to find it. In fact, the rare type of star is so elusive it took three satellites to identify it. The discovery highlights how astronomers use the different strengths of European and U.S. satellites to reveal new insights about star birth and death in our galaxy.

The star is a neutron star, an ultra-dense ember of an exploded star. It was first seen by the European Space Agency's INTEGRAL satellite. Neutron stars are not all that unusual, but this neutron star is rare because it was found even though it was in a "double hiding place," the scientists said. It is deep in a spiral arm of our Milky Way galaxy, obscured by dust; and it is buried in a two-star system shrouded by dense gas. 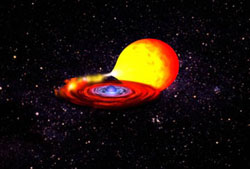 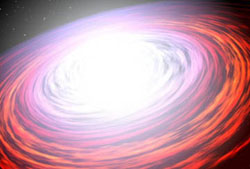 Images above: These artist renderings show neutron star IGR J16283-4838 orbiting its companion star. Matter flowing from the companion to the neutron star, attracted by strong gravity, occasionally flares up in X-ray and gamma-ray light. Such flares last only for a few days or weeks but reveal the location of an otherwise dim system. Click on images to enlarge. + Print resolution still (left - 9.4 MB) + Print resolution still (left - 15.3 MB) Credit: NASA/Walt Feimer

Because the star was "cloaked," the scientists couldn't immediately decipher the nature of the object, so they enlisted NASA's Rossi X-ray Timing Explorer and the newly launched Swift satellite to observe it in different "colors," or wavelengths, of high-energy light.

"Our Galaxy's spiral arms are loaded with neutron stars, black holes and other exotic objects," said Dr. Volker Beckmann of NASA Goddard Space Flight Center in Greenbelt, Md., lead author of a paper about the star appearing in the Astrophysical Journal. "The problem is, the spiral arms are too dusty to see through. The right combination of X-ray and gamma-ray telescopes can reveal what's hiding there. And this provides new clues about the true star formation rate in our Galaxy."

Neutron stars are the core remains of supernovas, exploded stars once about ten times as massive as the Sun. Neutron stars contain about a sun's worth of mass compacted into a sphere about 15 miles across. The cloaked neutron star is called "IGR J16283-4838" and is located in the direction of the spiral arm Norma, about 50,000 light years away. (One light-year is the distance light travels in a year, almost six trillion miles or nearly 9.5 trillion kilometers. The closest star to our own Sun is a little more than 4 light-years away, and our galaxy is about 100,000 light years across.)

Neutron stars are also energetic beacons from a region too dusty to study in detail otherwise. As more and more are discovered, new insights about what is happening in the Galaxy's spiral arms begin to emerge, Beckmann said. 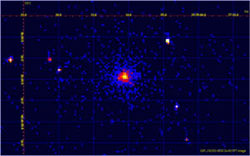 INTEGRAL, the Rossi Explorer and Swift each detect X-rays and gamma rays, which are far more energetic than the visible light our eyes can detect. Yet each satellite has different capabilities. INTEGRAL has a large field of view, enabling it to scan the Milky Way galaxy for neutron star and black hole activity. Swift contains a high-resolution X-ray telescope, which allowed scientists to zero in on IGR J16283-4838. The Rossi Explorer has a timing spectrometer, a device used to uncover properties of the light source, such as speed and rapid variations only about a thousandth of a second (millisecond) long. The Galaxy's spiral arms block visible light from reaching us, but not energetic X-rays and gamma rays.

Simona Soldi, a doctoral candidate at INTEGRAL Science Data Centre in Geneva discovered the new, bright source with INTEGRAL on April 7, 2005. "We are always hunting for new sources," she said. "It's exciting when we find something so elusive. How many more like this are out there?"

Because gamma rays are hard to focus into sharp images, the science team used the X-ray Telescope on Swift on April 13 and 15 to determine a precise location. Swift confirmed that the light was "highly absorbed," which means the double star system was filled with dense gas from the stellar wind of the companion star. Starting on April 14, the scientists used the Rossi Explorer to observe the source as it faded away. This observation revealed a familiar light signature, clinching the case for a fading X-ray emitting double star system with a neutron star.

"Piece by piece we solved this puzzle," said Dr. Jamie Kennea of the Swift science team at Penn State. "Swift was built primarily to detect gamma-ray bursts, so it was a thrill to use the X-ray Telescope to do something quite different, to discover a neutron star."

INTEGRAL, the International Gamma Ray Astrophysics Laboratory, was launched in 2002. The Rossi Explorer and Swift launched in 1995 and 2004, respectively.