New Image of Earth, Seen Through Gamma-Ray Eyes
A NASA-funded scientist has produced a new type of picture of the Earth from space, which complements the familiar image of our "blue marble". This new picture is the first detailed image of our planet radiating gamma rays, a type of light that is millions to billions of times more energetic than visible light.

The image portrays how the Earth is constantly bombarded by particles from space. These particles, called cosmic rays, hit our atmosphere and produce the gamma-ray light high above the Earth. The atmosphere blocks harmful cosmic rays and other high-energy radiation from reaching us on the Earth's surface. 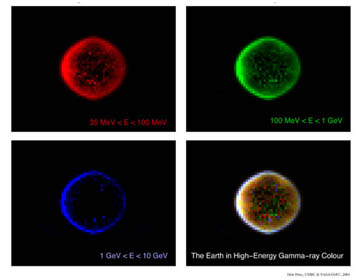 Image above: Here we see a false-color image of the Earth in three gamma-ray energy bands, analogous to the colors red (lower energy), green (mid energy) and blue (higher energy) in the visible spectrum. For the complete caption and print-resolution versions, see the links at the end of this article. Image credit: NASA/CGRO/EGRET/ Dirk Petry

"If our eyes could see high-energy gamma rays, this is what the Earth would look like from space," said Dr. Dirk Petry of NASA Goddard Space Flight Center in Greenbelt, Md. "Other planets -- most famously, Jupiter -- have a gamma-ray glow, but they are too far away from us to image in any detail."

Petry assembled this image from seven years of data from NASA's Compton Gamma-Ray Observatory, which was active from 1991 to 2000. The Compton Observatory orbited the Earth at an average altitude of about 260 miles (420 km). From this distance, the Earth appears as a huge disk with an angular diameter of 140 degrees. The long exposure and close distance enabled Petry to produce a gamma-ray image of surprisingly high detail. "This is essentially a seven-year exposure," Petry said.

The gamma rays produced in the Earth's atmosphere were detected by Compton's EGRET instrument, short for Energetic Gamma-Ray Experiment Telescope. In fact, 60 percent of the gamma rays detected by EGRET were from Earth and not deep space. Although it makes a pretty image, local gamma-ray production interferes with observations of distant gamma-ray sources, such as black holes, pulsars, and supernova remnants.

In 1972 and 1973 the NASA satellite SAS-II captured the first resolved image of the Earth in gamma rays, but the detectors had less exposure time (a few months) and worse energy resolution.

Petry, a member of the GLAST team at NASA Goddard, is an assistant research professor at the Joint Center for Astrophysics of the University of Maryland, Baltimore Country. A scientific paper describing his work is available at:

Here we see a false-color image of the Earth in three gamma-ray energy bands, analogous to the colors red (lower energy), green (mid energy) and blue (higher energy) in the visible spectrum.

Because the satellite was so close to the Earth, the image has an extreme wide-angle view as if one were taking a picture with a 35 mm photo camera equipped with an 8 mm fish-eye lens. The Earth's rim is much brighter than the center because cosmic rays hitting the rim at a shallow angle are more likely to create detectable gamma rays. The asymmetry in intensity between East and West is caused by the Earth's magnetic field.