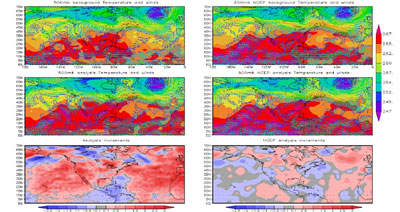 Although still under development, many organizations and research institutions are starting to adopt ESMF. Under a partnership, groups from NASA, the National Science Foundation (NSF), the National Oceanic and Atmospheric Administration (NOAA), the Department of Energy (DOE), the Department of Defense and research universities are using ESMF as the standard for coupling their weather and climate models to achieve a realistic representation of the Earth as a system of interacting parts, unifying much of the modeling community. ESMF makes it easier to share and compare alternative scientific approaches from multiple sources, uses remote sensing data more efficiently and eliminates the need for individual agencies to develop their own coupling software.

Image above: Using ESMF, researchers have coupled an atmosphere model and an ocean model that had not interacted before. This image depicts the sea surface temperature after five iterations of the simulation. The collaborators on this field test are the Geophysical Fluid Dynamics Laboratory (GFDL) and the Massachusetts Institute of Technology (MIT). Credit: Shep Smithline, GFDL; Chris Hill, MIT.

The newly completed field tests, known as interoperability experiments, show that this new approach in coupling models can be successful. For instance, temperature and wind outputs are similar around the globe when ingesting data into an NSF-NASA atmosphere model as they are for the atmosphere model used operationally by NOAA. Although most of the experiments would require exhaustive tuning and validation to be scientifically sound, they already show that ESMF can be used to assemble coupled applications quickly, easily and with technical accuracy.

“These interoperability experiments illustrate the role ESMF can play in integrating the national Earth science resources,” da Silva said. “Using existing data assimilation technology from NCEP, the finite-volume Community Atmosphere Model, or fvCAM, was able to ingest conventional and satellite observations, a capability that could open the door to using the fvCAM for weather as well as climate prediction.” The fvCAM, which includes land surface capabilities, was developed by NCAR, with key components from GSFC.

The second experiment combines NCEP’s data assimilation technology with the Aries atmosphere model originally developed by the NASA Seasonal-to-Interannual Prediction Project. Aries is typically coupled with an ocean model to run experimental forecasts of phenomena such as El Niño and its effects on precipitation. Among additional advantages, the two field tests enable the intercomparison of systems for satellite data assimilation. 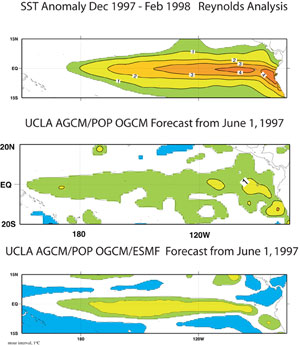 The coupled experiments have many other potential applications. The third experiment, combining a GFDL atmosphere-land-ice model with an MIT ocean-sea ice model (known as MITgcm), may ultimately bring new insights into ocean uptake of carbon dioxide and other important atmospheric gases and how this process affects the climate.

In an early independent adoption of ESMF technology, UCLA researchers have successfully coupled their Atmospheric General Circulation Model to the MITgcm for the first time and updated a previous coupling to the LANL Parallel Ocean Program model. They made experimental predictions of the El Niño/Southern Oscillations with the coupled models using initial states provided by JPL’s Estimating the Circulation and Climate of the Ocean (ECCO) project. These preliminary results validate ESMF performance in terms of scientific fidelity and support the importance of ECCO products for improving short-term climate forecasts.

Demonstrations of the software and the field tests are taking place at the 4th ESMF Community Meeting at MIT in Cambridge, Mass., July 20–22. Reaching beyond the ESMF partnership, the research team releases the software to the scientific community via the Internet. NCAR, home of the core implementation team, is scheduled to release ESMF Version 2.2.0 this month.