Scientists Confirm Earth's Energy Is Out of Balance
Scientists have concluded more energy is being absorbed from the sun than is emitted back to space, throwing the Earth's energy "out of balance" and warming the globe. 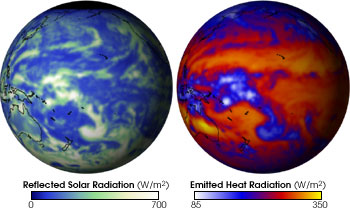 Image above: Clouds and the Earth's Radiant Energy System (CERES) measurements show the reflected solar radiation (left) and emitted heat radiation (right) for January 1, 2002. In both images, the lightest areas represent thick clouds, which both reflect radiation from the Sun and block heat rising from the Earth's surface. Notice the clouds above the western Pacific Ocean, where there is strong uprising of air, and the relative lack of clouds north and south of the equator. The animation, created from daily data, shows how rapidly these measurements change. Click on image to view animation. High resolution image of the left globe. High resolution image of the right globe. Credit: NASA

The study reveals Earth's energy imbalance is large by standards of the planet's history. The imbalance is 0.85 watts per meter squared. That will cause an additional warming of 0.6 degrees Celsius (1 degree Fahrenheit) by the end of this century.

To understand the difference, think of a one-watt light bulb shining over an area of one square meter (10.76 square feet). Although it doesn't seem like much, adding up the number of feet around the world creates a big effect. To put this number into perspective, an imbalance of one-watt per square meter, maintained for the past 10,000 years is enough to melt ice equivalent to one kilometer (.6 mile) of sea level, if there were that much ice. 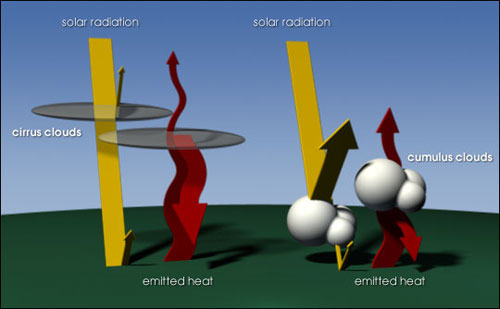 Image above: The Earth’s energy balance refers to the amount of energy received from the sun (yellow arrows) minus the energy reflected and emitted from the Earth (red arrows). Clouds play an important role in regulating this balance. Thin cirrus clouds permit sunlight to pass through them, while blocking a significant amount of the heat radiating from the surface. Thick cumulus clouds reflect most sunlight, and block the majority of heat radiating from the surface. Credit: NASA

"The energy imbalance is an expected consequence of increasing atmospheric pollution, especially carbon dioxide, methane, ozone, and black carbon particles. These pollutants block the Earth's heat radiation from escaping to space, and they increase absorption of sunlight," said Jim Hansen of NASA's Goddard Institute for Space Studies, New York. He is the lead author of the new study, which is in this week's Science Magazine Science Express.

As the Earth warms it emits more heat. Eventually the Earth will be back in balance, if the greenhouse gas emissions are kept at the same level of today. Scientists know it takes the ocean longer to warm than the land. The lag in the ocean's response has practical consequences. It means there is an additional global warming of about one degree Fahrenheit that is already in the pipeline. Even if there were no further increase of human-made gases in the air, climate would continue to warm that much over the next century. 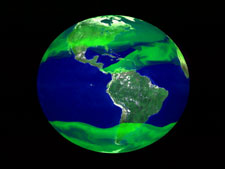 Image right: Methane is one greenhouse gas that impacts the Earth's energy balance and this animation shows the circulation of methane around the globe. Click on image to view animation. Credit: NASA

Warmer world-wide water temperatures also affect other things. "Warmer waters increase the likelihood of accelerated ice sheet disintegration and sea level rise during this century," Hansen said. Since 1993, sea levels have been measured by satellite altimeters. Data has shown they have risen by approximately 3.1 centimeters or 1.26 inches per decade.

Although 3.1 centimeters is a small change, the rate of increase is twice as large as in the preceding century. There are positive feedbacks that come into play, as the area of ice melt increases. The researchers agree monitoring ice sheets and sea level is necessary to best ensure the system is in balance.