Tropical Deforestation Affects Rainfall in the U.S. and Around the Globe
Today, scientists estimate that between one-third and one-half of our planet's land surfaces have been transformed by human development. 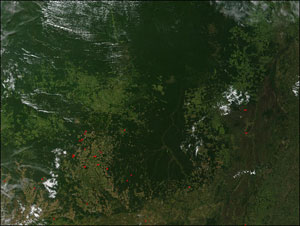 Now, a new study is offering insight into the long-term impacts of these changes, particularly the effects of large-scale deforestation in tropical regions on the global climate. Researchers from Duke University, Durham, N.C., analyzed multiple years of data using the NASA Goddard Institute for Space Studies General Circulation Computer Model (GCM) and Global Precipitation Climatology Project (GPCP) to produce several climate simulations. Their research found that deforestation in different areas of the globe affects rainfall patterns over a considerable region.

Deforestation in the Amazon region of South America (Amazonia) influences rainfall from Mexico to Texas and in the Gulf of Mexico. Similarly, deforesting lands in Central Africa affects precipitation in the upper and lower U.S Midwest, while deforestation in Southeast Asia was found to alter rainfall in China and the Balkan Peninsula. It is important to note that such changes primarily occur in certain seasons and that the combination of deforestation in these areas enhances rain in one region while reducing it in another. 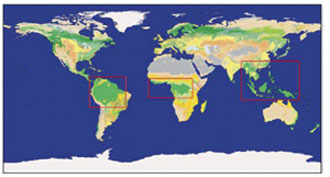 Image to left: Global Land Cover Map: Global land-cover map (1-kilometer or 3/5ths of a mile resolution), emphasizing with red rectangles the three regions in which all tropical forests (green color) are replaced with a mixture of shrubs and grassland in the study. Click on image to enlarge. Credit: NASA-GISS and Duke University

This finding contradicts earlier research suggesting deforestation would result in a reduction in precipitation and increase in temperature in the Amazon basin, but carry no detectable impact on the global water cycle.

"Our study carried somewhat surprising results, showing that although the major impact of deforestation on precipitation is found in and near the deforested regions, it also has a strong influence on rainfall in the mid and even high latitudes," said Roni Avissar, lead author of the study, published in the April 2005 issue of the Journal of Hydrometeorology.

Specifically, deforestation of Amazonia was found to severely reduce rainfall in the Gulf of Mexico, Texas, and northern Mexico during the spring and summer seasons when water is crucial for agricultural productivity. Deforestation of Central Africa has a similar effect, causing a significant precipitation decrease in the lower U.S Midwest during the spring and summer and in the upper U.S. Midwest in winter and spring. Deforestation in Southeast Asia alters rainfall in China and the Balkan Peninsula most significantly. 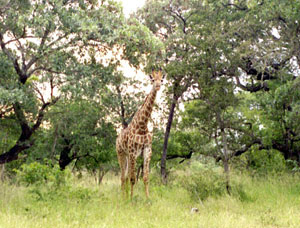 Image to right: Deforestation Affects Animal Habitats: This picture of a giraffe coming through trees was taken of the Skukuza area during NASA's SAFARI 2000 field mission, just prior to the African monsoon season. Click on image to enlarge. Credit: Oak Ridge National Laboratory DAAC/Colorado State University

Improved understanding of tropical forested regions is valuable to scientists because of their strong influence on the global climate. The Amazon Basin literally drives weather systems around the world. The tropics receive two-thirds of the world's rainfall, and when it rains, water changes from liquid to vapor and back again, storing and releasing heat energy in the process. With so much rainfall, an incredible amount of heat is released into the atmosphere - making the tropics the Earth's primary source of heat redistribution.

"Deforestation does not appear to modify the global average of precipitation, but it changes precipitation patterns and distributions by affecting the amount of both sensible heat and that released into the atmosphere when water vapor condenses, called latent heat," said Avissar. "Associated changes in air pressure distribution shift the typical global circulation patterns, sending storm systems off their typical paths." And, because of the Amazon's location, any sort of weather hiccup from the area could signal serious changes for the rest of the world like droughts and severe storms.

Clearly, land-cover changes in tropical regions carry potentially significant consequences on water resources, wildfire frequency, agriculture and related activities at various remote locations. And while greenhouse gas emissions and pollutants receive considerable attention, this study shows that land-cover change is another important parameter that needs to be considered in climate policies, especially since deforestation rates in tropical Africa, Southeast Asia, and South America have remained constant or have increased over the past two decades. Land-cover change, depending on its nature, can either mitigate or exacerbate greenhouse warming.

The researchers caution that their results are based on numerical simulations performed with a single general circulation model and that reproducing the experiment with other computer models using different atmospheric variables would be beneficial. Current research is attempting to answer why deforestation has such a major influence on precipitation patterns during respective seasons.