Deep Impact Comet May Have Formed in Giant Planets Region
Comet Tempel-1 may have been born in the region of the solar system occupied by Uranus and Neptune today, according to one possibility from an analysis of the comet's debris blasted into space by NASA's Deep Impact mission. If correct, the observation supports a wild scenario for the solar system's youth, where the planets Uranus and Neptune may have traded places and scattered comets to deep space. 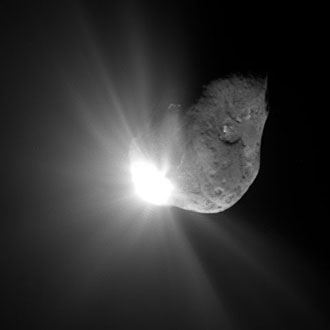 "Our observation is a definitive investigation revealing the composition of comet Tempel-1," said Dr. Michael Mumma of NASA's Goddard Space Flight Center, Greenbelt, Md. Mumma and his team used the powerful Keck telescope on top of Mauna Kea, Hawaii, to analyze in great detail light emitted by Tempel-1 gas ejected by the impact. Because each type of atom and molecule emits light at unique colors (frequencies), the team was able to determine the comet's chemical composition by separating its light into its component colors with an instrument called a spectrometer. Mumma is lead author of a paper on this research that appeared in Science Express on Sept.15, 2005.

Repeated solar heating can remove materials that have low freezing temperatures from the surface, giving the comet a crust that's different chemically from its interior. This makes it hard to discover a comet's true composition by simply looking at gas that's evaporating from the surface. NASA's Deep Impact mission crashed into comet Tempel-1 July 4, 2005, allowing scientists to test whether material ejected from its protected interior was closer to pristine.

By observing Tempel-1 before, during, and after impact, the team was able to distinguish surface gas from the impact debris, and they discovered that the interior does indeed have a different chemistry. "The amount of ethane (C2H6) in the cloud around the comet was significantly higher after impact than before," said Mumma.

Image above: The development of Tempel-1 on impact night, as observed with NIRSPEC instrument on the Keck-2 telescope. (A – C): Three images taken with the slit-viewing camera, in light reflected from the polished slit plate. The white area in the center is the coma, a cloud of dust and gas surrounding the comet. The black band extending left-right in each panel locates the spectrometer entrance slit. (A): The appearance of Tempel-1 just before impact. (B): The comet 27 minutes after impact. (C): The comet 69 minutes after impact.
Image credit: NASA/W. M. Keck Observatory/Michael Mumma

There are two possible explanations for this. In the first, the surface crust is different from the interior due to solar heating. The interior, however, is all the same. In the second, the interior is a mix of regions with different compositions because the nucleus is actually composed of smaller "mini-comets" (cometesimals), each with a different chemistry. Deep Impact could have just so happened to hit one of these cometesimals, while the gas seen before impact might have came from a different region on the comet with different chemistry. Multiple impacts in different regions of the comet would be necessary to determine which scenario is correct, according to the team.

If the first scenario is correct, the comet could have formed in the region now bounded by the orbits of Uranus and Neptune, based on its interior chemistry. Different chemicals get frozen into a comet depending on its location. A comet that forms farther from the sun will have greater amounts of ices with low freezing temperatures, like ethane, than a comet that forms closer to the sun. By measuring the relative amounts of each chemical, astronomers can estimate where a comet formed.

Formation in this location supports a theory that the gas giant planets Uranus and Neptune formed closer to the sun than their current locations. The theory, proposed by Dr. Alessandro Morbidelli of the Observatoire de la Cote d'Azur, Nice, France, and his team, says that gravitational interaction between the gas giant planets and numerous small planets left over from the solar system's formation (planetesimals) brought the giant planets into an unstable orbital configuration. Neptune and Uranus were tossed outward and could have exchanged orbits. As they migrated outward, their gravity disrupted a large disk of comets that had formed in the region where Uranus and Neptune currently reside. Some were scattered into deep space, to a roughly spherical region called the "Oort cloud" that surrounds our solar system at about 10,000 times the earth-sun distance. Others were directed to the Kuiper belt, a region beyond Neptune that extends to several hundred times the Earth-sun distance.

If some Kuiper belt comets have similar chemistry to some Oort cloud comets, it would support this model of the solar system's rowdy early days by showing that certain comets had a common origin despite very different final destinations. Tempel-1 shares certain orbital characteristics with the "ecliptic" comets, a group that likely comes from the "scattered" Kuiper belt. "The amount of ethane in Tempel-1, however, is similar to the amount in the dominant group of comets that come from the Oort cloud region," said Mumma. Its chemical similarity to Oort cloud comets supports the idea that some Kuiper belt and Oort cloud comets formed in the same place.