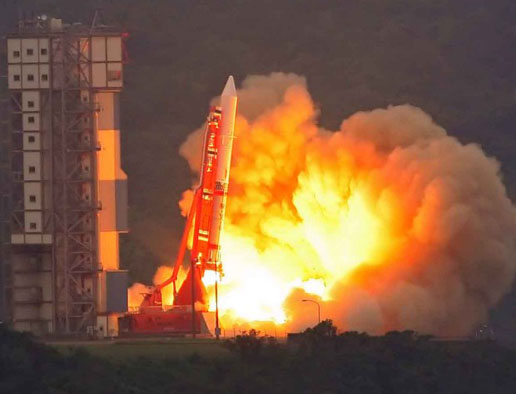 Image above: Glare and exhaust from the three stage, solid fuel M-V-6 rocket punctuates a perfect launch of the Astro-E2 observatory. The dramatic picture was taken at the Uchinoura Space Center on July 10 at 12:30 JST. For dedicated astronomers, a celebration is definitely in order as this launch is a reflight of the Astro-E payload, originally destroyed in a launch failure in February 2000. Now being checked out in Earth orbit, the innovative instrumentation on board the satellite will explore the Universe in energetic x-rays. Following a tradition of renaming satellites after their successful launch, Astro-E2 has been newly dubbed Suzaku. Suzaku, a phoenix-like deity in mythology associated with the southern part of the sky, is a 'Red Bird'. Credit: NASA

Key targets for Suzaku include black holes; the million-degree gas from star explosions, which is filled with newly created elements such as oxygen and calcium; and the optically invisible gas between stars and galaxies, which comprises most of the ordinary mass in the universe.

"Suzaku will fill a vital gap in our understanding of the X-ray universe," said Goddard's Dr. Richard Kelley, principal investigator for the U.S. contribution.

Along with the XRS on Suzaku are four X-ray Imaging Spectrometer (XIS) instruments developed in collaboration among Japanese institutions and the Massachusetts Institute of Technology. The Hard X-Ray Detector (HXD), built by the University of Tokyo, ISAS and other Japanese institutions is also on board.

The XRS and XIS instruments will analyze X-ray photons focused by individual telescopes. They were built at Goddard by a team led by Dr. Peter Serlemitsos, in cooperation with Nagoya University and other institutions in Japan. The HXD uses a tested yet improved technology.

Suzaku launched on an M-V rocket and will attain a near-Earth, circular orbit at approximately 560 kilometers (345 miles). The observatory's expected mission lifetime is five years. Suzaku is the fifth in a series of Japanese satellites devoted to studying celestial X-ray sources.

For more information about Suzaku on the Internet, visit: