NASA Satellites Yield Best-Ever Antarctic Maps
Scientists using satellite data have now created the most detailed maps ever produced of the vast snow-covered Antarctic continent. The maps reveal unprecedented views of surface features that provide clues to how and why the continent's massive ice sheets and glaciers are changing. 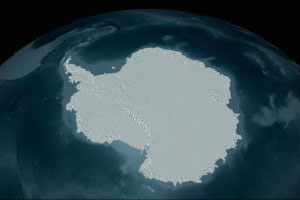 Researchers can now decipher the intricate history of ice movements in the just-released "Mosaic of Antarctica," which uses images from the Moderate Resolution Imaging Spectrometer onboard NASA's Terra and Aqua satellites. The map is the result of a partnership between NASA's Goddard Space Flight Center, Greenbelt, Md.; the University of Colorado's National Snow and Ice Data Center (NSIDC), Boulder; and the University of New Hampshire, Durham.

A second map to be released early next year will provide the most complete and accurate topographical survey of the continent ever undertaken, with more than 65 million points surveyed from space by the Geoscience Laser Altimeter System orbiting on NASA's Ice, Cloud and Land Elevation Satellite (ICESat). This "digital elevation model" produced at Goddard will be distributed by NSIDC in a format compatible with the Mosaic map.

"The Antarctic Mosaic shows a lot of very subtle changes in the slope of the terrain that you cannot see from the ground," says Robert Bindschadler, chief scientist of Goddard's Hydrospheric and Biospheric Sciences Laboratory. "These subtle variations are important because they tell us the direction the ice is flowing now and they indicate where it has gone in the past. The surface roughness also tells us about the bed underneath the ice and whether the ice is sliding over the bed or frozen to it."

The map will very likely reveal unseen features and new opportunities for exploration, Bindschadler said. "Antarctica is a big place, and there is still an awful lot of the ice sheet that hasn't been explored." The new map will be used by researchers to identify interesting areas and plan expeditions to investigate them.

The Mosaic removes the terrain distortion and produces a more accurate and natural-looking view of the continent and its very subtle surface features. "Using the Mosaic map together with the Canadian satellite, RADARSAT, is a real breakthrough," says Ted Scambos, one of the creators of the Mosaic at NSIDC. "The Mosaic shows the snow and rock surface almost perfectly, and RADARSAT reveals some of the features below the snow. It's very informative."

The ICESat topographic map complements the Mosaic's detailed views of the surface with elevation measurements over more of the continent than has ever been surveyed before. Although the very center of Antarctica remains unmapped because the satellite does not fly directly over the pole, more of the interior of the continent was mapped and in unprecedented detail.

"This is the most accurate elevation map of the ice sheet ever produced, says Jay Zwally, ICESat project scientist at Goddard. "And it will get even better as ICESat continues to acquire more elevation data for studying changes in the ice-sheet volume."

The precision of the ICESat map is more than 10 times better than previous satellite surveys due to the very narrow beam of the laser altimeter instrument compared to the broader beam of radar instruments flown before. The improved mapping of the height of the ice sheet, particularly in the interior of the continent, yields new information about how the topography of this remote area drives the flow of interior ice streams. Key areas such as the major ice streams feeding the Ross Ice Shelf are seen in detail for the first time.

Both maps will be distributed by NSIDC, which serves as one of eight Distributed Active Archive Centers funded by NASA to archive and distribute data from NASA's past and current satellites and field measurement programs. The Mosaic map is available through a user-friendly zoom-in Web interface that brings together previous maps, such as those from RADARSAT, with new data in different contrast settings that draw out hard-to-see features. The NASA-funded interface was developed at the University of New Hampshire by Mark Fahnestock and Norman Vine.