NASA Satellite Data Used by INPE Provides Rapid Analysis of Amazon
The Amazon, a vast tropical forest stretching across South America, is so large that is virtually impossible to study the evolving landscapes within the basin without the use of satellites. Scientists have used satellite imagery of the Amazon for more than 30 years to seek answers about this diverse ecosystem and the patterns and processes of land cover change. This technology continues to advance and a new study shows that NASA satellite images can allow scientists to more quickly and accurately assess deforestation in the Amazon. 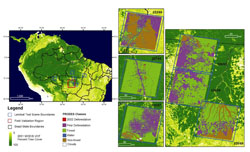 Image to right: Location of Landsat test scenes and field validation area within the Brazilian Amazon. Percent tree cover values from the 2001 Vegetation Continuous Fields (VCF) product show the extent of forest cover in the region. Map subsets show 2002 Instituto Nacional de Pesquisas Espaciais (INPE) Prorgram for the Estimation of Deforestation in the Brazilian Amazon (PRODES) classifications for each test scene over 2001 VCF percent tree cover. Test scenes are presented in counter-clockwise order, beginning in the northeast with scene 223/66 and followed by 227/65 in the north, 232/67 in the west, and the cluster of scenes 226/67, 226/68, and 225/69 in central Mato Grosso state. Click image to enlarge. Credit: Doug Morton, University of Maryland-College Park

Unlike MODIS data, analyses of high spatial resolution data demand extensive storage and processing requirements. And, in tropical forest regions, image quality is often reduced by cloud cover and infrequent coverage of high-resolution images. But MODIS obtains images of the Amazon up to four times per day and evaluations of the quality of data are provided with the image, clearly marking areas of clouds, water, or high aerosols. These impacts are further minimized with daily composites created through the combination of individual images. 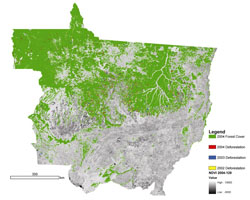 While high resolution imagery is still needed when estimating the total area of deforestation or when identifying small clearings, "the most exciting finding of this study is that it shows MODIS can permit regional analyses of land cover in a matter of days, a substantial reduction in effort in comparison to the months now required with Landsat," said Douglas Morton, scientist at the University of Maryland-College Park and lead author of the new study.

Deforestation rates in tropical Africa, Southeast Asia, and South America have remained constant or have increased over the past two decades, altering global carbon emissions and climate while elevating the need for frequent and accurate assessment of forest loss. In the Brazilian Amazon alone, where the growth of cattle ranching and cropland agriculture are the primary causes of forest clearing, about 7,700 square miles of forest are clear-cut and burned each year, or roughly the area of New Jersey. 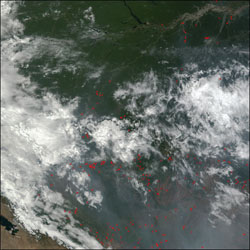 Image to right: From the rainforests around the Amazon River (top) in Brazil, through the central highlands and into Bolivia to the southwest, numerous fires were burning throughout the region on September 8, 2002. The fires were detected by the Moderate Resolution Imaging Spectroradiometer (MODIS) on NASA’s Terra satellite, and their locations are marked with red dots in this true-color image. Thick smoke and clouds are shrouding the highlands in the southern portion of the image. At bottom left, a portion of Lake Titicaca can be seen. Click image to enlarge. Credit: Jesse Allen, based on data from the MODIS Rapid Response Team, NASA-GSFC

This study found a marked trend of larger and more extensive deforestation events between 2001 and 2004 in Mato Grosso State, Brazil, which was later confirmed on the ground. Information like this is so valuable to scientists because the Amazon literally drives weather systems around the world.

The tropics receive two-thirds of the world's rainfall, and when it rains, water changes from liquid to vapor and back again, storing and releasing heat energy in the process. With so much rainfall, an incredible amount of heat is released into the atmosphere - making the tropics the Earth's primary source of heat redistribution. And, because of the Amazon's location, any sort of weather hiccup from the area could signal serious changes for the rest of the world like droughts and severe storms. 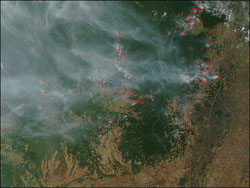 Image to left: On August 11, 2002, the Moderate Resolution Imaging Spectroradiometer (MODIS) on the Terra satellite detected scores of fires (marked with red dots) burning in northern Mato Grosso in west-central Brazil. Smoke blankets the tropical Amazon forests at the left of the image as fires and deforestation continue to encroach along the margins of the disappearing forests. Click image to enlarge. Credit: Jacques Descloitres, MODIS Land Rapid Response Team, NASA/GSFC

Global climate is also affected when Amazon burning practices to clear fields for farming result in large fires that create air pollution and release tiny particles, known as aerosols. Aerosols can both heat and cool the air, depending on size, shape and color. High concentrations of biomass burning aerosols also directly impact the local climate by increasing cloud formation but decreasing rainfall. In very smoky regions, cloud droplets form around the aerosol particles, but may never grow large enough to fall as rain.

Building on the results of this study, Brazil's INPE has developed a near or almost real time monitoring application for deforestation detection known as the Real Time Deforestation Monitoring System (DETER) system. 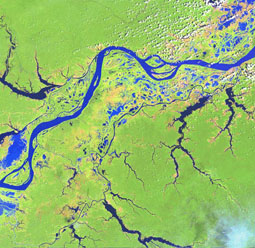 While this study highlights the challenges of monitoring deforestation and the use of MODIS data in the Amazon, it also shows that similar MODIS analyses could form the basis for a wide array of regional studies in a highly-automated fashion, with both scientific and decision-making utility.