Canada's Shrinking Ice Caps
Earth's ice-covered polar regions help to keep our climate cool and hold tremendous amounts of fresh water locked up in their glaciers, ice caps, and ice sheets. The ice contained in these vast freshwater reservoirs is the equivalent of nearly 220 feet of sea level. However, when most people think of polar ice, they usually do not think of Canada, the location of only a small percentage of the Arctic's polar land ice. 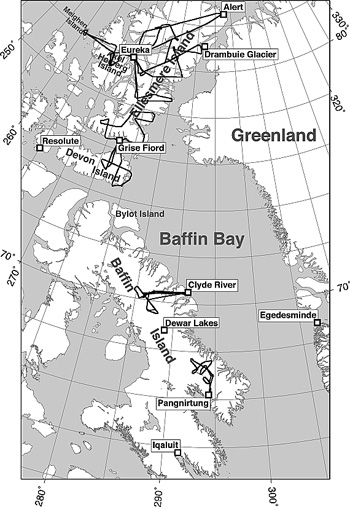 Waleed Abdalati, Head of the Cryospheric Sciences Branch at NASA's Goddard Space Flight Center (GSFC), Greenbelt, Md. published research recently in the Journal of Geophysical Research showing that Canada's Arctic ice is one of the more significant and immediate sources of world-wide changes in sea levels.

Abdalati and his colleagues say that Canada's Arctic ice is important because the wide area covered by these ice caps and the dramatic changes that have taken place in the Arctic climate in recent years. Studying this region will help researchers understand how much and in what ways Arctic glaciers and ice caps are contributing to sea level rise.

To study Canada's ice caps, Abdalati and his colleagues used a laser altimeter mounted on an airplane to measure the precise elevation of the ice surface. By making these measurements over many of the Canadian ice caps once in 1995 and repeating them again in 2000, they were able to determine how much the thickness of the ice sheet changed. By combining this information with temperature and precipitation data from weather stations nearby, and several decades of direct measurement of ice growth and shrinkage on certain ice caps, they were able to put these changes in their appropriate climatological context.

From their research, Abdalati and his colleagues found an increasing trend in both annual temperatures during the second half of the twentieth century. At the same time records showed that accumulation was approximately 15 percent higher during the 1995-2000 time period than for the 1951-1980 period (a data set that is often used as a climatological mean to which new measurements are historically compared). These characteristics contributed to changes in the ice caps in the late 1990s. 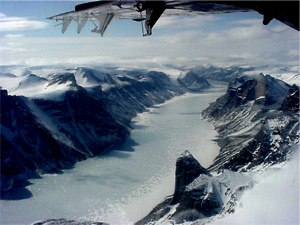 The researchers found that in areas where the ice melts very little, there was slight thickening of some ice caps, which could be due to accumulation from increased snowfall; however, overall they found that the ice caps and glaciers were thinning at the lower elevations where melt occurs. In some locations, where the changes were most substantial, this thinning appears to be a continuation of the retreat or melting of glaciers that followed the end of the Little Ice Age -- a period 150 years ago when the Earth was cooler and glaciers were more prevalent. However, the researchers also attributed the melting of the ice caps to the short-term warming trend of the late 1990s, which appears to have been amplified in the Arctic. They determined that the ice loss associated with these combined effects contributed to 0.065 millimeters (0.002 inches) per year to sea level rise during the 1995-2000 time period.