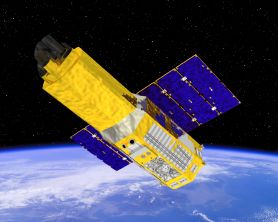 Image to right: Artist's rendering of the Suzaku spacecraft in orbit.

The four X-ray telescopes, together with a set of four cameras, performed flawlessly, capturing the image of an exploded star in the Small Magellanic Cloud. Supernovae are the cosmic factories of the most important elements in the Universe, and supernova remnants provide the crucial information on how they get disseminated in space. They are also spectacular objects and the ideal targets to “show off” the capabilities of the detectors.

“I’m extremely pleased to see how the four telescopes performed,” said team lead Dr. Peter Serlemitsos of the X-Ray Astrophysics Branch at GSFC. “Obviously it will take more time to study their performance in detail, but the first light images confirmed our expectations based on ground calibration.”

The four XRTs are made with foils coated with about two pounds of gold with a thickness of only 2,000 angstroms, which is about 1/200 to 1/600 the thickness of a human hair. X-rays bounce off the gold and are reflected toward the telescope detectors.

The four Charge-Coupled Devices detectors that capture the X-rays bounced by the telescopes are similar to those onboard other missions, such as Chandra and XMM-Newton, although these are new and have not yet been subjected to the rigors of space. The new instruments will allow scientists to study spectra and images of extended and faint sources like supernova remnants or cluster of galaxies.

It has been a bittersweet few weeks for the Suzaku team because another instrument on board, a high spectral resolution calorimeter built at GSFC, stopped functioning due to a problem with the cryogenics. The incident is still under investigation.

Despite this setback, the rest of the Suzaku mission is proceeding on schedule with first light from the third set of detectors on board – two hard X-ray detectors capable of capturing the very high-energy photons – expected shortly.

The Suzaku mission is a collaborative effort between the JAXA and NASA.

For more information, go to: