STEREO Spacecraft Arrive at NASA Goddard for Final Testing
The two Solar TErrestrial RElations Observatory (STEREO) spacecraft arrive at the NASA Goddard Space Flight Center in Greenbelt, Md. on Nov. 9 for major testing as they near completion. Set to launch in Summer 2006, STEREO is the first mission to image the sun and solar wind in 3-D. This new view is critical to improving our understanding of space weather and its impact to space and on Earth systems. 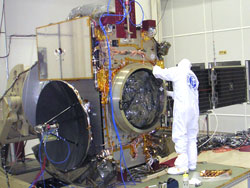 Image to right: After solar array deployment tests on Observatory B (the one that will be placed “behind” Earth in its orbit around the sun), APL STEREO technicians inspect solar blankets covering the hinges that connect the solar arrays to the spacecraft. Credit: NASA/Johns Hopkins University Applied Physics Laboratory

During its two-year mission, the two nearly identical spacecraft will explore the origin, evolution, and interplanetary consequences of coronal mass ejections (CMEs), the most violent explosions in our solar system. When directed at Earth, these billion-ton eruptions can disrupt satellites, radio communications, and power systems. In addition, energetic particles associated with CMEs are a serious hazard to spacecraft and astronauts.

"The arrival of both observatories at GSFC is a critical milestone for the STEREO project. The fully integrated observatories look great and represent a lot of hard work from a very dedicated APL/GSFC team. The next few months will be exciting as we put them through a rigorous space simulation test program in preparation for launch," said Mark Jarosz, Observatory Manager for the STEREO Project at NASA Goddard.

Upon arrival, the spacecraft will undergo multiple mechanical assembly and electrical tests to verify readiness for launch both in a stacked configuration, and on their own. Tests will simulate launch noise, space temperature variations, launch vibrations and validate the explosive nut used to separate the two satellites in orbit. Engineers also plan to deploy the high gain antenna, and ensure that radio emissions from the satellites don't interfere with other sensitive scientific instruments like the S/WAVES radio astronomy experiment.

STEREO's launch window extends from April through June 2006 at the Cape Canaveral Air Force Station (CCAFS), Fla. Truly an international effort, its instruments were built and shipped from the United States and several European countries. The observatory integration was performed at The Johns Hopkins University Applied Physics Laboratory (APL) in Laurel, Md. Testing is being conducted both at APL and at NASA.

"STEREO is going to help us answer some of the biggest questions about the sun. Not only will we see if CMEs are moving toward Earth, but we'll see how they move through the solar system," said Dr. Michael Kaiser, Project Scientist for STEREO at the Goddard Space Flight Center.

STEREO, managed by the Goddard Space Flight Center, is the third mission selected for NASA's Solar-Terrestrial Probe (STP) Program. The Johns Hopkins University Applied Physics Laboratory (APL) will maintain command and control of the spacecraft throughout the mission, while NASA tracks and receives the data, determines the orbit, and coordinates the science results.

For more information about STEREO on the Internet, visit: http://www.nasa.gov/stereo

Video will be available Nov. 9 on NASA TV on the Web (see http://www.nasa.gov/ntv) and at 12, 3, 6, and 10 p.m. EST on an MPEG-2 digital signal accessed via satellite AMC-6, at 72 degrees west longitude, transponder 17C, 4040 MHz, vertical polarization. It's available in Alaska and Hawaii on AMC-7 at 137 degrees west longitude, transponder 18C, at 4060 MHz, horizontal polarization. A Digital Video Broadcast compliant Integrated Receiver Decoder is required for reception.