Return to the Goddard main page.

Why Go Back to the Moon? 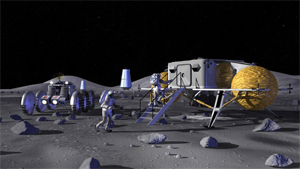 President Bush’s 2004 proposal to return to the Moon, this time "to stay" with a lunar outpost, has stimulated vigorous debate. A Los Angeles Times editorial (Dec.10, 2006), for example, argued forcefully that robots can do anything necessary on the Moon, and that human participation is not really needed. Given the stunning performance of American robots on Mars, this point of view is worth serious discussion. Why should we send humans back to the Moon? After all, we’ve already done it, six times, in the 20th century.

The four-part "Destination: Moon" series explore topics related to NASA's journey back to the Moon. Authored by Dr. Paul Lowman, of NASA's Goddard Space Flight Center, the series will teach readers about the historical significance of the moon in relation to space travel and exploration.

Dr. Paul Lowman is a geophysicist at the NASA Goddard Space Flight Center, where he has worked for nearly 50 years. He has a wealth of stories to share about our country's space program, from its infancy to the present, as well as where we are headed in the future.