New Science Instruments for Hubble
To enhance the Hubble Space Telescope’s science capabilities, two new instruments -- the Wide Field Camera 3 and Cosmic Origins Spectrograph -- will be installed during the fifth and final shuttle servicing mission to the observatory in August 2008.

Wide Field Camera 3 will replace the existing Wide Field Planetary Camera 2 that astronauts installed on Servicing Mission 1 in 1993. By capturing high-resolution images over a wide range of wavelengths, the new camera’s capabilities will far surpass those of the previous cameras on Hubble. 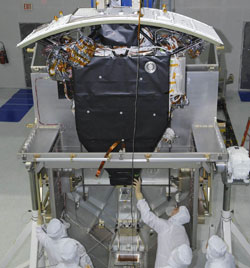 Image right: Engineers check NASA's Wide Field Camera 3 instrument to ensure it will fit properly in the protective enclosure that will carry it to orbit aboard the space shuttle next summer for Servicing Mission 4 to the Hubble Space Telescope. Credit: NASA

What makes Wide Field Camera 3 superior is its ability to cover a range from the ultraviolet, through visible light, all the way into near infrared, and everything in between. The new camera has a more panchromatic range, meaning that it is able to cover a broader range of colors all at the same time, which distinguishes it as truly remarkable. The outstanding images that Wide Field Camera 3 is designed to produce will greatly contribute to the success of Hubble’s scientific voyage.

In order to determine the overall quality of the images that this new camera will produce, several factors were considered. The evaluation is similar to the one consumers generally use when shopping for a new digital camera. Most people want a camera that will produce high quality pictures, in the most efficient manner, and within their particular budget.

“Picture the standard camera you use for home photography. Is it a one megapixel camera, a four megapixel camera?” asked HST Development Project Scientist Randy Kimble at NASA’s Goddard Space Flight Center. “Naturally, the bigger the format the more detail you can get on things or the more field you can cover. The new Wide Field Camera 3 has a larger field of view as well as higher sensitivity to fainter objects.”

As a result of these improvements, astronomers will get a better advantage in surveying the sky faster and seeing faint objects more quickly. Although the same wavelengths have been covered before by instruments on the telescope, they have never been covered with the same combination of sensitivity and faintness.

Spectroscopy is the science of breaking up light into different components and, thus, determining an object’s temperature, density, chemical composition, and velocity. Using this approach, the Cosmic Origins Spectrograph will provide the means for characterizing distant objects in space. This new spectrograph is well equipped to observe faint point objects to detect their structure and composition, providing valuable information that has never been obtained. 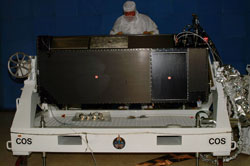 Image left: The Cosmic Origins Spectrograph instrument undergoes testing to ensure it will perform as required. Astronauts will install the instrument during Servicing Mission 4 to the Hubble Space Telescope. Credit: NASA

“Our goal with the Cosmic Origins Spectrograph is to produce the most efficient spectrograph ever flown in space,” explained HST senior scientist Dave Leckrone at Goddard. “It will do this by spreading out the light into its component colors and measuring the brightness of the light and how it changes the color. All kinds of interesting physical information come from these kinds of observations.”

Although the new spectrograph will not the produce the pretty pictures that Hubble is so well known for, the kind that make it to the newspapers in terms of their beautiful imagery, it will be a very fundamental tool for astrophysicists.

“The spectrograph’s design is very clever in that it does everything it needs to do with light with one bounce, with one mirror,” said Leckrone. “A single bounce collects the light, spreads the light out into its component colors and spectrums and brings it to a focus on an electronic spectrum.”

Should astronauts successfully repair the Space Telescope Imaging Spectrograph aboard Hubble, it will complement observations made by the new Cosmic Origins Spectrograph.

COS will take the in place of COSTAR, the Corrective Optics Space Telescope Axial Replacement, astronauts installed during Servicing Mission 1, to correct a flaw in Hubble’s primary mirror.

“Some people may not know that the Hubble project at Goddard is responsible for all things Hubble,” Leckrone remarked. “There is not anything regarding the telescope that we are not responsible for in some way and that includes the design and development of the instruments. From A to Z … we play a key part.”

To ensure mission success, all mission hardware goes through rigorous ground testing prior to launch and the Wide Field Camera 3 and Cosmic Origins Spectrograph are no exception.

Goddard engineers put all components and instruments through a series of simulations that replicate gravitational forces experienced during launch (known as G-forces), noise and vibration during launch, and the extreme hot and colds spells in space to assess how they perform. Any issues are caught ahead of time and fixed, so the team can be confident that everything the astronauts will be installing on Hubble will withstand its trip to space and meet its mission life expectancy.

“When the shuttle goes up, these two new instruments will be spectacular,” Kimble said. “Astronomers worldwide are thrilled at the prospect of having a brand new set of eyes on the universe.”