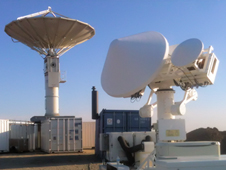 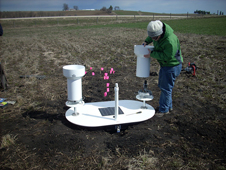 Caption: IFC staff install a rain gauge and soil moisture platform in the Turkey River watershed in northeast Iowa. Credit: Iowa Flood Center
› Larger image The public is invited to participate in a free webinar about a NASA field campaign that uses rain measurements to improve flood forecasting. The webinar will be hosted by NASA and the Community, Collaborative Rain, Hail, and Snow Network, known as CoCoRaHS, run by Colorado State University, Fort Collins.

The webinar will be held on June 11 at 7 p.m. EDT and will feature the Iowa Flood Studies field campaign, a partnership between NASA's Global Precipitation Measurement mission and the Iowa Flood Center at the University of Iowa, Iowa City.

"We're trying to figure out how well our satellites estimate rainfall," said Walt Petersen, GPM ground validation scientist at NASA's Wallops Flight Facility in Virginia. "This study is unique in that it takes space-borne observations, it takes ground-based observations, and it brings those things into a modeling framework that should further our ability to predict flooding."

Flooding is a major hazard worldwide that affects millions of people and can cause billions of dollars in damage. During the Iowa Flood Studies' six-week field campaign, scientists measure rainfall from rain gauges and radar set up across eastern Iowa to improve satellite measurements of precipitation from space and to improve the forecast models they use to predict floods.

Walt Petersen, GPM science team lead for the field campaign, and Steve Nesbitt of the University of Illinois at Urbana-Champaign, will talk about the importance and the day-to-day operations of these field campaigns. They will discuss the campaign's science results, which will help researchers better understand Earth's water cycle, weather and climate, meteorology and the new capabilities of using satellite technology to investigate Earth's hydrological systems. In addition, webinar participants will discuss precipitation-related education and citizen science efforts.

CoCoRaHS is a citizen-scientist network with more than 18,000 volunteers nationwide that encourages volunteers of all ages to record and monitor precipitation using accurate, low-cost rain gauges. The organization is working with the GPM mission, a new satellite mission to measure precipitation from space every three hours that will help advance the understanding of Earth's water and energy cycles. A partnership between NASA and the Japan Aerospace Exploration Agency, the GPM Core satellite is scheduled to launch in early 2014.

Registration for the webinar is required at:
https://www3.gotomeeting.com/register/465984054

For more information on the Iowa Flood Studies, visit:
http://pmm.nasa.gov/ifloods or http://iowafloodcenter.org/projects/ifloods

For more information about CoCoRaHS or to volunteer, visit:
http://www.cocorahs.org/