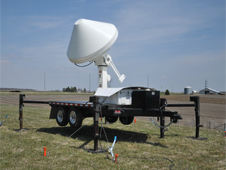 The public and media are invited to meet representatives of NASA and the Iowa Flood Center at an outreach event at 7 p.m. CDT on Wednesday, June 12, at the Wilder Business Center, Room 104, on the Northeast Iowa Community College campus in Calmar, Iowa. No registration is necessary.

This spring, NASA and Iowa Flood Center researchers have deployed state-of-the-art instruments across eastern Iowa to collect ground data on precipitation. A number of these instruments are currently located in the Turkey River watershed, including a weather radar on the southern edge of Calmar, another near Elkader, and numerous rain gauges and soil moisture probes throughout the watershed. The project is part of NASA’s Global Precipitation Measurement mission, an international satellite mission that will set a new standard for global precipitation measurements from space.

The speakers include:
For more about the IFloodS field campaign and instruments, visit:
http://pmm.nasa.gov/ifloods
http://iowafloodcenter.org/projects/ifloods