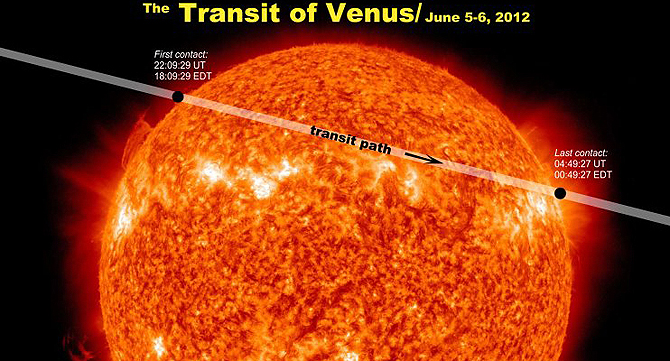 GREENBELT, Md. – NASA’s Goddard Space Flight Center Visitor Center will host a public event on June 5 from 5 p.m. to 8 p.m. EDT to celebrate a rare celestial event called the Transit of Venus. Such an event won’t occur again until the year 2117.

A "transit of Venus" occurs when the planet Venus passes directly between the sun and the Earth. During the event, Venus will be seen from Earth as a small black sphere moving across the face of the sun.

For those on the east coast of North America, the event will be visible beginning just after 6 p.m. EDT and continuing through sunset. The entire transit will last more than six hours.

The Goddard Visitor Center will host a watch party that will include near real-time images from NASA’s Solar Dynamics Observatory mission, coverage of the event from several locations via NASA TV, in-person presentations by NASA experts, hands-on activities for children of all ages and viewing opportunities of the transit via solar telescopes.

No reservations are needed so bring the entire family. The visitor center is located on IceSat Road in Greenbelt, Md. Parking is available on a first come, first served basis.

To learn more about the Transit of Venus event at the Goddard Visitor Center, visit:

If you want more information about the Transit of Venus in general, visit: