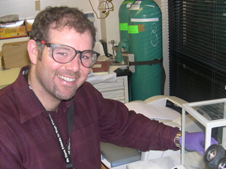 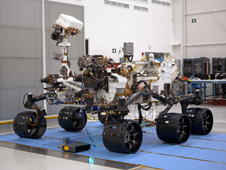 NASA's Mars rover Curiosity has a pair of bug-eyes swiveling on a stalk nearly 8 feet off the ground. It is 6-wheeled, 1800-lbs. and the size of a mini-Cooper automobile. Curiosity is slated to land on the Red Planet on Aug. 6, 2012 (EDT). Credit: NASA/JPL-Caltech
› Larger image 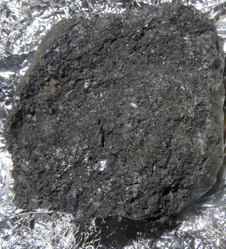 Dr. Glavin and other NASA scientists discovered amino acids, a fundamental building block of life, in a meteorite where none were expected. This is a typical example of a meteorite remnant linked to asteroid 2008 TC3, with a dark scruffy texture. Credit: Peter Jenniskens
› Larger image The public is invited to a free talk to called "Astrobiology and the Search for Extraterrestrial Life," by Dr. Daniel P. Glavin, a NASA Astrobiologist.

The talk is part of the Gerald Soffen Lecture Series and will be held at the Visitor's Center at NASA's Goddard Space Flight Center on Thursday, April 12, 2012 at 7 p.m. EDT (doors open at 6:45 p.m.). The free talk is about one hour and will be accompanied by satellite image and end with a question and answer session. Registration is requested on-line at http://www.nasa.gov/centers/goddard/visitor/events/vc-lecture-glavin.html. Pre-registration will be open until Tuesday, April 10 at 5 p.m. EDT.

"I am going to have a miniature scale model of the Mars Science Laboratory Rover Curiosity that is currently on its way to Mars," Glavin said. "I am keeping my fingers crossed for a safe landing on Mars in August. This is going to be a very exciting summer!"

Glavin's talk will describe the concept of a "habitable environment" and the conditions on the ancient Earth that led to the origin of life. Understanding the basic requirements for life and the prebiotic chemistry that led to the emergence of life on Earth will help guide our search for life beyond Earth. Glavin will also give an overview of the Mars Exploration Program and future plans for sending instrumentation to Mars to explore habitable environments.

According to Glavin, the possibility for extraterrestrial life in our solar system is not limited to Mars, but other "habitable" worlds might exist including the icy Moons of Jupiter and Saturn, Europa and Enceladus that may have large sub-surface oceans capable of supporting life. The challenge for scientists and engineers in the next couple of decades will be to design miniaturized instruments and technologies capable of detecting the signatures of life in our own solar system and beyond.

Dr. Glavin is currently involved in the analysis of organic compounds in meteorites and the search for extraterrestrial life. He first became involved in Astrobiology research in 1996 when a meteorite from Mars found in Antarctica, called Allan Hills 84001, revealed possible remnant of an ancient martian life forms. Although Glavin's research suggested that some of the chemical evidence was compromised by terrestrial contamination in Antarctica, the ALH 84001 discovery energized the Astrobiology community and the red planet continues to be one of the primary targets for exploration and the search for life beyond Earth.

He helped develop and test the Sample Analysis at Mars (SAM) instrument that is onboard the Mars Science Laboratory rover mission. SAM, a microwave oven-sized mass spectrometer will taste and sniff the martian dirt to look for water, organic compounds, and other biologically important elements required by life as we know it. In 2002, he spent two months in Antarctica searching for meteorites on the surface of the ice as part of the Antarctic Search for Meteorites program.

The Gerald Soffen lecture series is dedicated to Dr. Gerald Soffen (1926-2000) who led the science team for NASA's Viking program, was Director of Life Sciences at NASA Headquarters, Project scientist for NASA's Earth Observing System, and created NASA Academy, NASA's premiere leadership training internship. The Viking 2 lander was posthumously named after Dr. Soffen and a crater on Mars was named "Soffen." He was best known, however, for his passion for inspiring the next generation of scientists and engineers.

NASA's Goddard Space Flight Center is physically located at 8800 Greenbelt Rd., Greenbelt, Md., 20771. The Goddard Visitor Center is located off ICESat Road (formerly Soil Conservation Road). Once on ICESat Road, turn left into the Visitor Center prior to the security checkpoint. Visitors are still welcome to attend without pre-registration, but please note that attendees who have submitted pre-registration forms will have priority for seating, and that overflow seating may be required to accommodate all guests.

To register on-line, please go to:
http://www.nasa.gov/centers/goddard/visitor/events/vc-lecture-glavin.html
(Scroll down for registration form)

For directions to the Visitor's Center from Washington, D.C. or Baltimore, visit:
http://www.nasa.gov/centers/goddard/visitor/directions/index.html