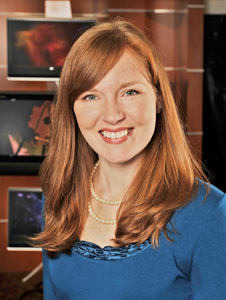 Dr. Amber Straughn is a Research Astrophysicist in the Observational Cosmology Laboratory, at NASA's Goddard Space Flight Center in Greenbelt, Md., and serves as the Deputy Project Scientist for James Webb Space Telescope Education and Public Outreach. Credit: NASA WASHINGTON -- Groundbreaking scientific results have come from NASA’s Hubble Space Telescope for more than 20 years, and they have revolutionized our understanding of the universe. Now new questions have arisen that demand a new space-based telescope with improved technologies and expanded capabilities, according to NASA scientist Amber Straughn.

Straughn will discuss NASA's James Webb Space Telescope at 11:30 a.m. EDT on Wednesday, March 21, in the Mary Pickford Theater on the third floor of the Library of Congress' James Madison Building, 101 Independence Ave. S.E., Washington, D.C. The event is free and open to the public. No tickets are needed.

"I spend my days studying distant galaxies using the Hubble Space Telescope, but in some areas we've pushed Hubble to its limits," said Dr. Amber Straughn is a Research Astrophysicist and the Deputy Project Scientist for James Webb Space Telescope Education and Public Outreach at NASA's Goddard Space Flight Center in Greenbelt, Md. "I'll explain the exciting things we hope to learn with this amazing new space observatory."

The illustrated lecture, the second in a series of programs in 2012, is presented through a collaboration between the Library’s Science, Technology and Business Division and NASA Goddard Space Flight Center. The lecture series is in its sixth year.

The James Webb Space Telescope, which is expected to launch in 2018, is an international collaboration of NASA, the European Space Agency and the Canadian Space Agency. The instrument will work primarily in the infrared range of the electromagnetic spectrum with some capability in the visible range. NASA calls it the premier observatory of the next decade.

Thousands of astronomers worldwide will study every phase in the history of our universe, ranging from the evolution of our own solar system and the first luminous glows after the Big Bang to the formation of solar systems capable of supporting life on planets like Earth.


The telescope will have a mirror 6.5 meters in diameter and a sunshield the size of a tennis court. The Webb telescope will reside in an orbit about 1.5 million kilometers (1 million miles) from the Earth.

Straughn's research focuses on interacting and star-forming galaxies in the context of galaxy assembly. She has most recently been working on infrared spectroscopic data from the new Wide Field Camera 3 on the Hubble Space Telescope. Her broad research interests include galaxy formation and evolution, galaxy mergers and interactions, star formation and black hole growth, and dark energy and its effect on the galaxy merger rate.

Straughn obtained her bachelor’s in physics at the University of Arkansas in Fayetteville in 2002 and completed her master’s and doctorate in physics at Arizona State University in 2008. She has been at NASA Goddard since 2008.

The Library of Congress maintains one of the largest and most diverse collections of scientific and technical information in the world. The Science, Technology and Business Division provides reference and bibliographic services and develops the general collections of the Library in all areas of science, technology, business and economics. For more information, visit www.loc.gov/rr/scitech/.

The Library of Congress, the nation's oldest federal cultural institution and the largest library in the world, holds nearly 151.8 million items in various languages, disciplines and formats. The Library serves the U.S. Congress and the nation both on-site in its reading rooms on Capitol Hill and through its award-winning website at www.loc.gov.

For inquiries about this or upcoming talks at the Library of Congress, the public can contact the LOC Science, Technology and Business Division at 202-707-5664. ADA accommodations should be requested five business days in advance at 202-707-6382 (voice/tty) or ada@loc.gov.