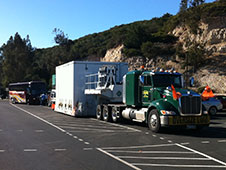 The LDCM spacecraft had a smooth trip from Orbital Space Sciences Corp. in Gilbert Ariz. Engineers rode along in an RV to make sure the there were no problems en route. › Larger image
Credit: NASA/Jerry Nagy 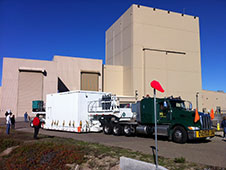 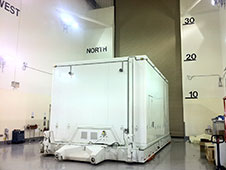 The shipping container holding LDCM was unloaded into the West High Bay airlock where the outside of the container was cleaned in preparation for opening on Thursday. › Larger image
Credit: NASA/Jerry Nagy GREENBELT, Md. -- An oversized semi-trailer truck carrying NASA’s Landsat Data Continuity Mission (LDCM) has arrived at its launch site at Vandenberg Air Force Base in California in preparation for launch. This NASA and U.S. Geological Survey mission will continue a 40-year record of measuring change on the planet from space.

LDCM is the eighth satellite in the Landsat series, which began in 1972. It will extend and expand global land observations that are critical in many sectors, including energy and water management, forest monitoring, human and environmental health, urban planning, disaster recovery and agriculture.

Following final tests, the LDCM satellite will be attached to an Atlas V rocket and launched into space February 11, 2013. Built and tested by Orbital Science Corp., LDCM left their Gilbert, Ariz. facility on Dec. 17.

LDCM carries two instruments, the Operational Land Imager (OLI) built by Ball Aerospace & Technologies Corp. in Boulder, Colo., and the Thermal Infrared Sensor (TIRS) built by NASA Goddard "Both of these instruments have evolutionary advances that make them the most advanced Landsat instruments to date and are designed to improve performance and reliability to improve observations of the global land surface," said Ken Schwer, LDCM project manager at NASA Goddard.

OLI will continue observations in the visible, near infrared, and shortwave infrared portions of the electromagnetic spectrum and includes two new spectral bands, one of which is designed to support monitoring of coastal waters and the other to detect previously hard to see cirrus clouds that can otherwise unknowingly impact the signal from the Earth surface in the other spectral bands. TIRS will collect data in two thermal bands and will thus be able to measure the temperature of the Earth's surface, a measurement that's vital to monitoring water consumption, especially in the arid western United States.

NASA and the U.S. Department of the Interior through the U.S. Geological Survey (USGS) jointly manage the Landsat program. After launch and the initial check out phase, USGS will take operational control of the satellite, will collect, archive, and distribute the data from OLI and TIRS, and will rename the satellite as Landsat 8. The LDCM data will be freely and openly available through the USGS data system.

NASA's Launch Services Program at Kennedy is responsible for launch management. United Launch Alliance is the provider of the Atlas V launch service.