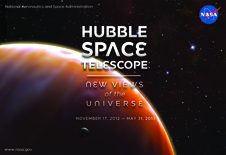 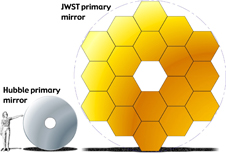 The Webb telescope exhibit is part of the "New Views of the Universe: Hubble Space Telescope" traveling exhibit. The traveling NASA exhibit opens at the Washington County Museum at 17677 NW Springville Road in Portland, Oregon on Saturday, Nov. 17 and will be there through May 31, 2013.

"Technology and innovation are the backbone of Washington County’s Silicon Forest," said Sam Shogren, executive director of the Washington County Museum. "We saw a natural fit with the Hubble Space Telescope, a masterpiece of engineering, and the historically deep tech roots right here in Washington County."

Visitors will learn about cutting-edge technology like one that will see the universe in infrared light. All the new technology will enable scientists to see farther back in time than any other satellite in existence and make many scientific breakthroughs.

Several interactive games are also featured in the exhibit. You can step through distances in the universe with the "Cosmic Distance Scale"; "Scope it Out!" teaches players about two different types of telescopes and show how the Webb telescope is similar, yet different than other telescopes.

"The Webb telescope's increased sensitivity will allow scientists to see back to when the first galaxies formed just after the Big Bang," said Eric Smith, Webb program scientist at NASA Headquarters, Washington. "The larger telescope will have advantages for all aspects of astronomy and will revolutionize studies of how stars and planetary systems form and evolve."

Stand up displays will explain the revolutionary technology that is being developed for the Webb telescope, such as the microshutters and mirrors.

Microshutters are a new piece of technology being used on the Near Infrared Spectrograph (NIRSpec) instrument on the Webb telescope. NIRSpec is an instrument that will allow scientists to capture the spectra of more than 100 objects at once. Because the objects NIRSpec will be looking at are so far away and so faint, the instrument needs a way to block out the light of nearer bright objects. The microshutters were developed to help solve this problem. Microshutters are tiny cells that measure 100 by 200 microns, or about the width of three to six human hairs.

One of the exhibits offers a comparison between the Hubble Space Telescope and the Webb telescope. One thing that catches the eye is the difference in the size between the Webb's and Hubble's mirrors. Both a telescope’s sensitivity and how much detail it can see are directly related to the size of the mirror area that collects light from the cosmos. A larger area collects more light to see deeper into space, just like a larger bucket collects more water in a rain shower than a small one. Webb will have a much larger mirror than the Hubble, which means the Webb telescope will have excellent resolution. The completed primary mirror will be 6.6 meters (7.2 yards) in diameter, about 2.75 times larger than the Hubble Space Telescope's primary mirror, which is 2.4 meters (2.6 yards) in diameter.

Viewers will also be able to read about the Webb's mission plans and engineering challenges on the mission, such as folding up the giant mirrors in the rocket for launch, and unfolding them once deployed in space. For those who can't see the exhibit in Portland, they can get a look at it on-line at: http://jwst.gsfc.nasa.gov/exhibit.html.

The Hubble traveling exhibit was developed by the Space Telescope Science Institute and the Smithsonian Institution Traveling Exhibition Service (SITES).

The Washington County Museum is dedicated to learning and cultural appreciation by igniting the imagination and celebrating diverse cultures. As a cultural leader of Washington County, the museum’s exhibits and programs create an understanding of a mutual past and a shared future.

For more information about the Washington County Museum, visit:
www.washingtoncountymuseum.org