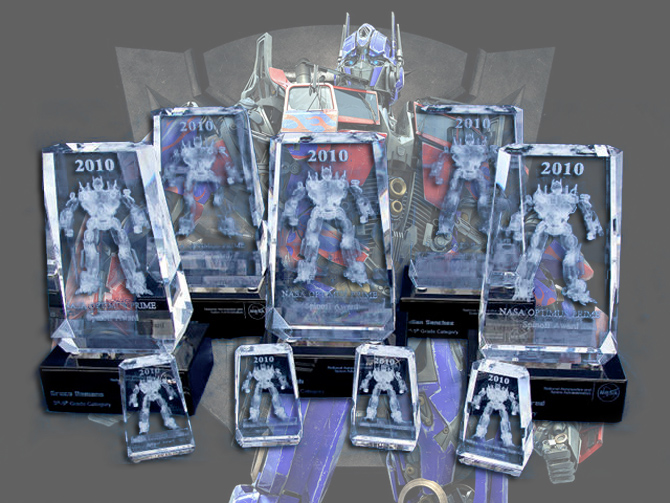 GREENBELT, Md. -- NASA is set to begin its third annual NASA OPTIMUS PRIME Spinoff Video Contest to help raise student awareness and understanding of NASA technologies and their many benefits to the public and our everyday lives. Registration for the contest is open from September 28, 2012 to December 15, 2012.

The NASA OPTIMUS PRIME Spinoff Video Contest is held each year to teach students that just like Hasbro's popular TRANSFORMERS character OPTIMUS PRIME, NASA technologies developed for applications in space have been modified for use in many products they may unknowingly use every day to improve their lives here on Earth. Each video submission allows students the opportunity to describe their favorite story from the most current edition of NASA's annual Spinoff publication. This year's contest will feature stories from the 2011 edition of Spinoff.

Last year's contest introduced the inclusion of financial scholarships for the top three submissions in each age group (third-fifth grade, sixth-eighth grade and ninth- twelfth grade). The scholarships were awarded by the American Society of Mechanical Engineers (ASME) Foundation through an agreement with NASA. According to Matt Schatzle, Executive Director of the ASME Foundation, "The ASME Foundation is proud to provide scholarships to the OPTIMUS PRIME winning teams and help encourage these great young kids to explore degrees and careers in science and engineering. Our partnership with NASA is very rewarding and something our thousands of mechanical engineer members who work at NASA can be proud of."

"It is our goal to make the contest bigger and better each year," said Nona Cheeks, head of the Innovative Partnerships Program Office, which manages the contest. "The ASME Foundation's contribution of financial scholarships last year was a tremendous step in the right direction. We look forward to working with the ASME Foundation, Hasbro and other interested parties that have approached us to make this year's contest and awards ceremony even better still."

Submissions to the OPTIMUS PRIME Spinoff Contest consist of three-minute videos that should demonstrate an understanding of the NASA technology and its mission application as described in the story, as well as the commercial application and public benefit. Submitted videos will be posted online, where the public will be encouraged to vote for their favorites in the preliminary round of judging.

The top five submissions based on the public voting results in each of three grade categories will advance to a final judging round. A NASA panel of judges will select the winning entry in each age category. The students submitting the winning entries will be the guests of honor at the OPTIMUS PRIME Spinoff Contest awards ceremony in May 2013. While there the students will receive the OPTIMUS PRIME Spinoff Contest trophy and have the opportunity to meet NASA VIPs, astronauts and actor Peter Cullen, who voices the character OPTIMUS PRIME.

TRANSFORMERS and OPTIMUS PRIME are trademarks of Hasbro and are used with permission. © 2012 Hasbro. All Rights Reserved.

For more information, and to register for the contest, please visit the NASA OPTIMUS PRIME Spinoff Contest Web site at:
http://opspinoff.gsfc.nasa.gov