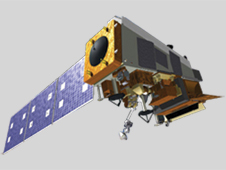 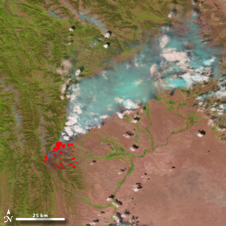 The VIIRS instrument on the Suomi National Polar-orbiting Partnership satellite captured this image showing smoke pouring out from the Fontenelle Fire in Wyoming, located just 18 miles (29 kilometers) west of Big Piney. The mid-infrared sensors on VIIRS show the red contours representing the heat from the fires. The blaze, first reported at 4 p.m. local time on June 24, still continues to burn. According to Inciweb, as of July 16 the fire had burned 64,083 acres. In the image strong southwesterly winds carried the thick smoke towards the northeast. The U.S. Forest Service reported that, as of June 26, smoke could be seen by residents of the Dubois area. “The teams are calling for the estimated containment in November,” said Nan Stinson, Bridger-Teton National Forest public information officer. “There are still pockets of burning; we’re expecting the fire to have heat in it until winter.” VIIRS continues a legacy set by the Moderate Resolution Imaging Spectroradiometer (MODIS), an instrument aboard NASA's Terra and Aqua satellites. These images provide active fire data, burn scars and smoke plumes as emergency response teams continue to fight the fires. Credit: Ivan Csiszar (NOAA/NESDIS Center for Satellite Applications and Research) and Wilfrid Schroeder (University of Maryland Earth System Science Interdisciplinary Center)
› Larger image

The final contract was signed on June 19, 2012, with Raytheon Space and Airborne Systems of El Segundo, Calif., for the Visible Infrared Imager Radiometer Suite (VIIRS) instrument. The Advanced Technology Microwave Sounder (ATMS) contract was signed with Northrop Grumman Electronic Systems in April, 2012. NASA completed the JPSS-1 Spacecraft and the Ozone Mapping and Profiler Suite instrument contract with Ball Aerospace in 2011. The contract to Raytheon Intelligence and Information Systems for the JPSS Ground System was also completed in 2011, as was the Crosstrack Infrared Sounder (CrIS) instrument contract with ITT Exelis.

These instruments form the backbone of space-based observations used for weather forecasting, and environmental and climate monitoring. The ATMS and CrIS instruments onboard JPSS-1 will be used as input for numerical weather prediction models, essential for weather forecasts beyond three days. The JPSS-1 VIIRS instrument will provide imagery that is essential for monitoring severe weather in areas like Alaska and for detecting and tracking volcanic ash and wildfires. It will also gather data on a wide range of Earth's properties, including the atmosphere, clouds, radiation budget, clear-air land and water surfaces, and sea surface temperature.

The instrument contracts include work to build the instruments for the JPSS-1 mission while also providing support services for units previously launched on the Suomi NPP mission in October 2011. All the instruments on NPP have been activated and are operating nominally. For example, preliminary data is being released to aid forecasters and researchers, including images of fires in Southwest Wyoming and Southeast Idaho.

The JPSS program is the restructured civilian portion of the National Polar-orbiting Operational Environmental Satellite System (NPOESS) program and this step represents the final action to transition the instrument contracts to NASA. The contracts are managed by the JPSS program. Data and imagery obtained from JPSS will increase the timeliness, accuracy and cost-effectiveness of NOAA’s public warnings and forecasts of weather and climate events, reducing the potential loss of human life and property.

NOAA is responsible for the JPSS program with NASA’s Goddard Space Flight Center in Greenbelt, Md., procuring and integrating the system elements.

For more information about JPSS, visit:

John Leslie
NOAA Office of Communications and External Affairs
301-713-0214
john.leslie@noaa.gov
› Back To Top