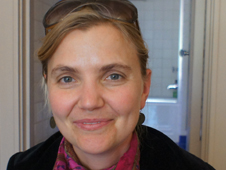 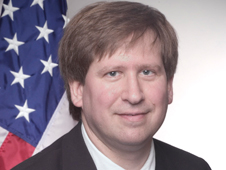 Physicist and electrical engineer Diane Elizabeth (Betsy) Pugel, who works at the Detector Systems Branch at the NASA Goddard Space Flight Center in Greenbelt, Md., received the Women in Aerospace's Achievement Award (WIA) at the organization's 26th Annual WIA Awards Dinner and Ceremony on Nov. 1. Among other criteria, WIA bestows this award on individuals who have demonstrated noteworthy, proven, technical, or scientific achievement on a single aerospace project or program that represents a breakthrough or milestone in the aerospace field.

Pugel received the honor because of her work implementing new technologies and cutting-edge approaches to test candidate materials for the thermal-protection system on NASA's Orion crew exploration vehicle. The thermal-protection system was developed to protect the conical-shaped crew module from friction-induced heat as it hurtled through Earth's atmosphere during reentry.

The approach she used to test materials was innovatively applied to take spectroscopic measurements and ultraviolet images of resin-based composites and oxides to evaluate their degree of cure, variations, and defects. Unlike other testing methods, the approach was non-destructive, portable, and could be used in field tests. In addition to her work on Orion, Pugel also advanced large-scale computed tomography and metal-composite bond analyses for the Federal Aviation Administration.

Also recently honored is Goddard Chief Engineer Steven Scott. The American Institute of Aeronautics and Astronautics (AIAA) named Scott one of its 184 new Associate Fellows in the 2012 class. To be selected, individuals must have at least 12 years of professional experience and a recommendation from at least three current Associate Fellows. He will be honored at the organization's Associate Fellows Dinner on Jan. 9, 2012 in conjunction with the 50th AIAA Aerospace Sciences Meeting in Nashville, Tenn.

Pugel, a Michigan native, is an avid soccer player and cellist, and enjoys tinkering with bicycles. Scott was born in Easton, Penn. He enjoys music, skiing, and walking his dog.

For more information about the Women in Aerospace's Achievement Award, visit:

For more information about the AIAA, visit: