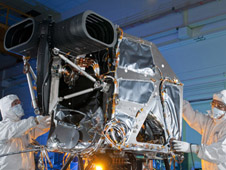 › View larger image
The Operational Land Imager (OLI), built by the Ball Aerospace and Technologies Corporation, will fly on the Landsat Data Continuity Mission (LDCM). OLI will measure in the visible, near infrared, and short wave infrared portions of the spectrum, with an improved signal-to-noise ratio compared to past Landsat instruments. The opening facing the left of the photo will point at the Earth, and the opening on the right is for pointing towards the sun, to calibrate the instrument. Credit: Ball Aerospace 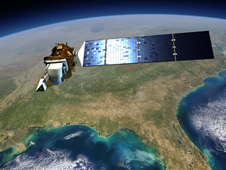 A multitude of scientific, commercial and governmental users rely on Landsat as their primary source of moderate-resolution, multispectral, image data. OLI will measure Earth’s reflectance in nine portions of the spectrum, including visible light, near infrared, and shortwave infrared, providing data that scientists and others use to quantify changes in Earth’s landscapes.

OLI images will cover wide areas of the Earth's landscape while providing sufficient resolution to distinguish features like urban centers, farms, forests and other land uses. The OLI will provide Earth-imaging at 15-meter (49 ft.) panchromatic and 30-meter multispectral spatial resolutions along a 185 km (115 miles)-wide swath. The entire Earth will fall within view of the OLI once every 16 days from the near-polar LDCM orbit.

OLI represents advancement in Landsat sensor technology. Instruments on earlier Landsat satellites employed scan mirrors to sweep the instrument fields of view across the surface swath width and transmit light to a few detectors. The OLI will instead use long detector arrays, with over 7000 detectors per spectral band, aligned across its focal plane to view across the swath. The OLI design results in a more sensitive instrument providing improved land surface information with fewer moving parts. Engineers expect this new design to be more reliable while providing improved performance.

"OLI provides the key sensor technology to allow continuation of Landsat Earth observations into a fourth decade," said Ball Aerospace president and CEO, David L. Taylor. "This continuation is essential to maintain seamless acquisition of Earth-from-space images not captured by any other private or public source."

Landsat satellites capture unique Earth surface data vital to agriculture, water management, disaster response, scientific research, national security, and many other areas of societal benefit. "This is a crucial event for the LDCM mission and the Landsat Program," said Bruce Quirk, USGS coordinator for the Land Remote Sensing Program. "OLI will provide the data continuity that the science community has depended on for nearly 40 years."

NASA plans to launch LDCM in December 2012 as the follow-on to Landsat 5, launched in 1984, and Landsat 7, launched in 1999. Both are continuing to supply images and data, but they are operating well beyond their designed lives and suffer limitations due to aging. As with preceding Landsat missions, the U.S. Geological Survey will operate LDCM and maintain its data archive once it reaches orbit and begins observations. USGS plans to change the name of LDCM to Landsat 8 when USGS takes over operations after launch and on-orbit checkout. Ball Aerospace & Technologies Corp. built the OLI instrument.

Orbital Sciences Corporation is building the LDCM spacecraft that will carry a two-sensor payload, the OLI and a Thermal Infrared Sensor (TIRS), into space when launched in December 2012. Integration of the spacecraft and the two sensors will occur prior to shipping the assembled LDCM satellite to the Vandenberg Air Force Base, California launch site.

The Operational Land Imager (OLI) is checked over by engineers at the Ball Aerospace & Technologies Corporation. OLI was built by Ball for the Landsat Data Continuity Mission (LDCM), a joint program between NASA and the USGS. Footage supplied by Ball Aerospace.

For more information about LDCM, visit: