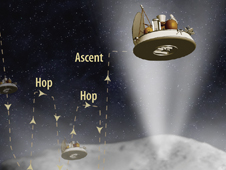 › View larger
Graphic artist concept of Comet Hopper. Credit: NASA/GSFC/University of Maryland GREENBELT, Md. -- NASA selected the Comet Hopper mission to continue in its mission concept phase. If chosen to move forward for a 2016 mission, the project would be managed by NASA Goddard Space Flight Center in Greenbelt, Md. Jessica Sunshine of the University of Maryland in College Park is the principal investigator. The team will receive $3 million for further studies.

"We've had some amazing cometary flybys but they have given us only snapshots of one point in time of what a comet is like," said Sunshine. "Comets are exciting because they are dynamic, changing throughout their orbits. With this new mission, we will start out with a comet that is in the cold, outer reaches of its orbit and watch its activity come alive as it moves closer and closer to the sun."

The Comet Hopper mission would study the evolution of 46P/Wirtanen by landing on the comet multiple times and observing its changes as it interacts with the sun. Comet Hopper would observe the comet by making detailed in situ measurements from various locations on the surface and in the innermost coma as the comet moves through its orbit. The innermost coma is the atmosphere of the comet just off the surface of the nucleus where outgassing and jets originate.

"We would extensively explore the surface of a comet, this is something that has never been done before," said Joe Nuth, Comet Hopper project scientist at NASA Goddard. "We know that there are volatiles (molecules that easily evaporate at normal temperatures) inside a comet. We would go to places that are relatively flat and are likely hiding volatiles. Comet Hopper could be called a reconnaissance mission for an upcoming Comet Nucleus Sample Return mission, which has been deemed a high priority development effort by the Decadal Survey."

The spacecraft would carry complementary instruments to study the physical and chemical structure of the comet's nucleus and innermost coma. The suite of instruments would include both remote and in situ capabilities. Other partners would include Lockheed Martin, KinetX, the Johns Hopkins University Applied Physics Laboratory, University of Bern, NASA Jet Propulsion Laboratory and Discovery Communications.

NASA's Discovery Program requested proposals for spaceflight investigations in June 2010. A panel of NASA and other scientists and engineers reviewed 28 submissions and selected three for further study including Comet Hopper. After concept studies are reviewed in 2012, NASA will select one mission to continue development efforts leading up to launch in 2016. The selected mission will be cost-capped at $425 million, not including launch vehicle funding.