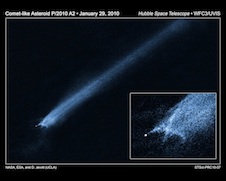 This is a NASA Hubble Space Telescope picture of what was first thought to be a comet but is probably an asteroid collision. The inset picture shows a complex structure that suggests the object is not a comet but instead the product of a head-on collision between two asteroids traveling five times faster than a rifle bullet (about three miles per second). Astronomers have long thought that the asteroid belt is being ground down through collisions, but such a smashup has never before been seen. The filaments are made of dust and gravel, presumably recently thrown out of the 460-foot-diameter nucleus. Some of the filaments are swept back by radiation pressure from sunlight to create straight dust streaks. Embedded in the filaments are co-moving blobs of dust that likely originate from tiny unseen parent bodies. An impact origin would also be consistent with the absence of gas in spectra recorded using ground-based telescopes. At the time of the Hubble observations in January 2010, the object was approximately 180 million miles (300 million km) from the Sun and 90 million miles (140 million km) from Earth. Credit: NASA, ESA, and D. Jewitt (UCLA)
Full-resolution copy
GREENBELT, Md. -- NASA-funded scientists have discovered amino acids, a fundamental building block of life, in a meteorite where none were expected.

"This meteorite formed when two asteroids collided," said Dr. Daniel Glavin of NASA’s Goddard Space Flight Center, Greenbelt, Md. "The shock of the collision heated it to more than 2,000 degrees Fahrenheit, hot enough that all complex organic molecules like amino acids should have been destroyed, but we found them anyway." Glavin is lead author of a paper on this discovery appearing December 15 in Meteoritics and Planetary Science. "Finding them in this type of meteorite suggests that there is more than one way to make amino acids in space, which increases the chance for finding life elsewhere in the Universe."

Amino acids are used to make proteins, the workhorse molecules of life, used in everything from structures like hair to enzymes, the catalysts that speed up or regulate chemical reactions. Just as the 26 letters of the alphabet are arranged in limitless combinations to make words, life uses 20 different amino acids in a huge variety of arrangements to build millions of different proteins. Previously, scientists at the Goddard Astrobiology Analytical Laboratory have found amino acids in samples of comet Wild 2 from NASA’s Stardust mission, and in various carbon-rich meteorites. Finding amino acids in these objects supports the theory that the origin of life got a boost from space -- some of life’s ingredients formed in space and were delivered to Earth long ago by meteorite impacts.

When Dr. Peter Jenniskens of the SETI Institute, Mountain View, Calif., and NASA's Ames Research Center, Moffett Field, Calif., approached NASA with the suggestion to search for amino acids in the carbon-rich remnants of asteroid 2008 TC3, expectations were that nothing was to be found. Because of an unusually violent collision in the past, this asteroid's ingredients for life were a "culinary disaster" and now mostly in the form of graphite. The small asteroid, estimated at six to fifteen feet across, was the first to be detected in space prior to impact on Earth on October 7, 2008. When Jenniskens and Dr. Muawia Shaddad of the University of Khartoum recovered remnants in the Nubian Desert of northern Sudan, the remnants turned out to be the first Ureilite meteorites found in pristine condition.

A meteorite sample was divided between the Goddard lab and a lab at the Scripps Institution of Oceanography at the University of California, San Diego. "Our analyses confirm those obtained at Goddard," said Professor Jeffrey Bada of Scripps, who led the analysis there. The extremely sensitive equipment in both labs detected small amounts of 19 different amino acids in the sample, ranging from 0.5 to 149 parts per billion. The team had to be sure that the amino acids in the meteorite didn’t come from contamination by life on Earth, and they were able to do so because of the way amino acids are made. Amino acid molecules can be built in two ways that are mirror images of each other, like your hands. Life on Earth uses left-handed amino acids, and they are never mixed with right-handed ones, but the amino acids found in the meteorite had equal amounts of the left and right-handed varieties. 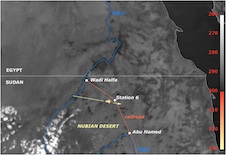 Infrared image taken by the Meteosat 8 satellite of asteroid 2008 TC3 exploding. The path of the asteroid is shown with a yellow arrow; red-yellow blob on arrow is infrared from the explosion. Credit: EUMESTAT
The sample had various minerals that only form under high temperatures, indicating it was forged in a violent collision. It's possible that the amino acids are simply leftovers from one of the original asteroids in the collision – an asteroid that had better conditions for amino acid formation. Dr. Jennifer Blank of SETI has done experiments with amino acids in water and ice, showing they survive pressures and temperatures comparable to a low-angle comet-Earth impact or asteroid-asteroid collisions.

However, the team thinks it's unlikely amino acids could have survived the conditions that created the meteorite, which endured higher temperatures – more than 2,000 degrees Fahrenheit (over 1,100 Celsius) – over a much longer period. "It would be hard to transfer amino acids from an impactor to another body simply because of the high-energy conditions associated with the impact," said Bada.

Instead, the team believes there’s an alternate method for making amino acids in space. "Previously, we thought the simplest way to make amino acids in an asteroid was at cooler temperatures in the presence of liquid water. This meteorite suggests there’s another way involving reactions in gases as a very hot asteroid cools down," said Glavin. The team is planning experiments to test various gas-phase chemical reactions to see if they generate amino acids. 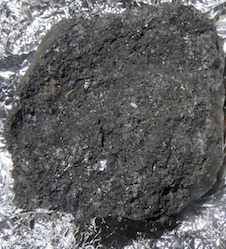 A typical example of a meteorite remnant linked to asteroid 2008 TC3, with a dark scruffy texture. Credit: Peter Jenniskens
Full-resolution copy
Fragments of 2008 TC3 are collectively called "Almahata Sitta" or "Station Six" after the train stop in northern Sudan near the location where pieces were recovered. They are prized because they are Ureilites, a rare type of meteorite. "An interesting possibility is that Ureilites are thought by some researchers to have formed in the solar nebula and thus the findings of amino acids in Almahata Sitta might imply that amino acids were in fact synthesized very early in the history of the solar system," adds Bada.

The Goddard analysis team includes Glavin and Drs. Jason Dworkin, Michael Callahan, and Jamie Elsila. This research was funded by the NASA Astrobiology Institute, which is managed by NASA Ames; the Goddard Center for Astrobiology, and the NASA Cosmochemistry and Astrobiology: Exobiology and Evolutionary Biology programs.