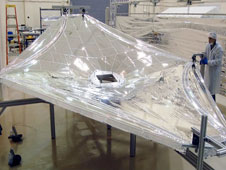 > Larger image
Photo of the 1/3 scale sunshield membranes undergoing final inspection at the Nexolve facility in Hunstville, Ala. Credit: Nexvolve Sunshield manufacturing and test plans were also evaluated and approved as part of the review, which took place Jan. 11-14 at the company’s Redondo Beach, Calif., space systems manufacturing facility. The Observatory is being designed and developed by Northrop Grumman under contract to NASA Goddard Space Flight Center, Greenbelt, Md.

"Passing this review is the culmination of years of intense effort meeting the unique challenges that have defined this mission," said Scott Willoughby, Webb telescope program manager for Northrop Grumman Aerospace Systems. "This is the first time a sunshield of this size and complexity will fly on a space telescope," Willoughby said. "We’ve achieved a very significant mission-critical milestone with this important validation of our sunshield design."

In preparation for the design review, 18 separate sub-assembly design audits were conducted on the sunshield’s extremely complex system of latches, tensioners, spreader bars and telescoping boom assemblies. The goal was to validate these sub-assemblies at the system level and evaluate points where they interface.

"There are no text books or guidelines on how to design and build a deployable Sunshield of this size," said Keith Parrish, Webb telescope Sunshield Manager at NASA Goddard. "Nearly a decade ago NASA and Northrop Grumman had to start from scratch and literally invent the techniques, materials, and mechanisms needed to do the job. We still have quite the challenge in front of us now that we start into the fabrication and testing phase but it's also a very exciting time."

> View vodcast
Mary Estacion of the Space Telescope Science Institute takes viewers on a behind-the-scenes look at the Webb telescope Sunshield in a 3:37 video interview with Andy Tao, Chief Engineer. For broadcast quality video: http://webbtelescope.org/webb_telescope/behind_the_webb/ Credit: STSCI. The Webb telescope’s sunshield is a five-layer structure the size of a tennis court. Each of the five membrane layers is about as thick as a human hair (one to two-thousands of an inch thick) and is made of a polymer-based film called Kapton. The layers are separated from each other and held in place by spreader bars and deployable booms. The sunshield will absorb and deflect solar light to keep the telescope operating at cryogenic temperatures so infrared sensors can see into the most distant galaxies.

The Webb telescope is NASA’s next-generation premier space observatory, exploring deep space phenomena from distant galaxies to nearby planets and stars. The Webb telescope will give scientists clues about the formation of the universe and the evolution of our own solar system, from the first light after the Big Bang to the formation of star systems capable of supporting life on planets like Earth. Expected to launch in 2014, the telescope is a joint project of NASA, the European Space Agency and the Canadian Space Agency.