Laurie Leshin 'Rocks' Goddard
Dr. Laurie Leshin has been interested in Mars rocks since she was a ten-year-old girl, when the Viking images of the Martian surface caught her attention. At the time, it was her dream to touch the Martian Rocks; today, she is one of the few scientists who have been fortunate enough to study and personally handle Mars rocks. 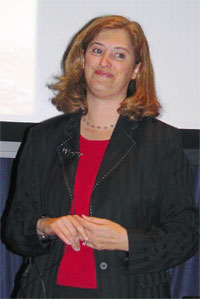 Dr. Leshin is currently the Director of Sciences and Exploration at NASA’s Goddard Space Flight Center. In her lecture "Mars Rocks," given on December 8th at Goddard Space Flight Center, Dr. Leshin discussed Martian meteorites and the future exploration of Mars. She also spoke about many of her personal experiences as a scientist, including her six-week expedition in Antarctica.

Since we have yet to send a human to collect samples from Mars, all of our “Mars rocks” come from Martian meteorites that have landed on earth. There are an estimated three-dozen meteorites from Mars. One may question how scientists are able to differentiate between meteorites from Mars and meteorites from other planets and the rest of space. Several years ago, small black particles were identified in meteorites. These particles were tested, and the concentration of the gases in the particles was a perfect match to the concentration of the gases in the Martian atmosphere. Therefore, scientists conclude that the rocks are from Mars. These Martian rocks have enabled scientists to study three important aspects of Mars. Firstly, since the rocks are igneous, and formed fairly recently (geologically speaking) this proves that there are active volcanoes on Mars. Therefore, Mars is geologically alive. Secondly, chemical analysis has revealed water crystals in Martian asteroids. Mars has a water cycle as complex as the water cycle of Earth. Therefore, Mars is hydrologically alive. Lastly, and possibly most significantly, some scientists speculated that they found fossils in Mars rocks. Although recent studies have shown that these fossils were not actually real, they have opened the door to the possibility of life on Mars and have forced people to question, “Is Mars biologically alive?”

In part because of all of the theories that the Mars rocks have generated, NASA is has a Mars exploration program. Dr. Leshin is proposing to lead a future Mars mission, the Sample Collection for Investigation of Mars (SCIM). SCIM’s mission involves a round trip to Mars, in which a probe sweeps up gas and dust from the Martian surface, and brings it back to earth to be examined. The proposed launch is slated for December 2011, and although the probe will be traveling at the high speed of 12,000 miles per hour, it will not return to Earth until January 2015. If all goes well, NASA is hoping to send humans to Mars in the future. Humans are much more efficient than probes; it takes a human only 45 seconds to accomplish what a rover does in one day! 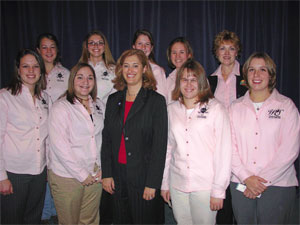 As well as sharing her plethora of knowledge about Mars rocks, Dr. Leshin also spoke about her six-week experience in Antarctica. Because Dr. Leshin is from Arizona, she shoveled snow for the first time while she was in Antarctica, and it was a lot of snow! In fact, it is because Antarctica is completely covered in snow that Dr. Leshin and several other scientists endured the harsh weather conditions and lack of amenities to spend six weeks in the highest, driest place on Earth. In search for meteorites, Dr. Leshin would speed across the arctic flatland on a snowmobile. Dark meteorites stood out on Antarctica’s icy white surface, so Dr. Leshin could easily identify and collect samples. All together, she and other scientists found over 400 meteorites. That made the lack of bathing, (they could not shower once the entire six weeks), small living quarters, (one 6’x 6’ tent for two people) and almost unbearably cold temperatures, (temperatures dropped to as low as –20° F with a wind-chill of –80° F), well worth it!

"Mars Rocks" was an informative and interesting lecture. Dr. Leshin’s enthusiasm about Mars rocks was contagious; that evening, the audience left Goddard with, not only fresh knowledge on Mars rocks, but also a sparked interest in them.

Story credit: Teresa Coda is a junior at Greencastle-Antrim High School, a NASA Explorer School in Greencastle, PA
› Back To Top