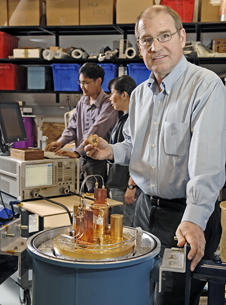 NASA's Harvey Moseley (pictured here) is developing the MicroSpec instrument (onto a silicon wafer measuring just four inches) that could provide a picture of how the cosmos developed into the kind of place that could support life like that found on Earth. Moseley is pictured here with a device he developed to demonstrate MicroSpec's superconducting circuits.
Credit: NASA
› Larger image
› Device closeup

Microshutters are a new piece of technology being used on the Near Infrared Spectrograph (NIRSpec) instrument on NASA's Webb telescope. Micro shutters are tiny cells that measure 100 by 200 microns, or about the width of three to six human hairs.
Credit: NASA
› Larger image

The international society for optics and photonics known as SPIE has awarded the 2013 George W. Goddard award to NASA's Harvey Moseley. Moseley, a senior astrophysicist at NASA's Goddard Space Flight Center in Greenbelt, Md., will receive the award at the August 2013 SPIE meeting in San Diego.

Moseley received the award "in recognition of his extraordinary inventions of superconducting imaging arrays for astronomy, ranging from sub-millimeter bolometers to energy sensitive X-ray microcalorimeters, and even dark matter detectors, as well as microshutter arrays for the James Webb Space Telescope near-infrared spectrometer."

"This is tremendous recognition of Harvey's genius in conceiving and realizing new technologies that enable revolutionary new science," said Nicholas E. White, the director of the Sciences and Exploration Directorate at NASA Goddard. "Well deserved!"

Moseley's microshutter array is a micromechanical device which will allow the James Webb Space Telescope to make its most critical observations one hundred times faster. The Webb's microshutters promise to enable detailed study of the first galaxies to form in the universe after the big bang.

The Webb telescope will be the premier observatory of the next decade. It will study every phase in the history of our universe, ranging from the first luminous glows after the big bang, to the formation of stellar systems capable of supporting life on planets like Earth, to the evolution of our own solar system. It is a joint project of NASA, the European Space Agency and the Canadian Space Agency.

Before the Webb, Moseley worked extensively on COBE as a member of its Science Working Group. The satellite made groundbreaking measurements of the Cosmic Microwave Background Radiation, which show the universe soon after the big bang. Astrophysicists John Mather and George Smoot won the 2006 Nobel Prize in physics for this work.

Moseley’s accomplishments also include invention of the X-ray microcalorimeter, a sensitive detector used in X-ray astronomy. He has also worked on the following programs that have either flown or are expected to fly: the Kuiper Airborne Observatory, the Stratospheric Observatory for Infrared Astronomy (SOFIA), NASA’s Spitzer Space Telescope and Japan’s Suzaku (ASTRO-E2) mission.

Moseley grew up in Ebony, Va. He received his bachelor’s degree from Connecticut College, his master’s degree and doctorate from University of Chicago. He is a member of the American Physical Society and the American Astronomical Society.