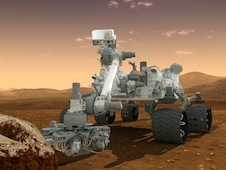 Developed at NASA's Goddard Space Flight Center in Greenbelt, Md., the Sample Analysis at Mars (SAM) instrument suite is a portable chemistry lab tucked inside the Curiosity rover. SAM examines the chemistry of the Martian samples it ingests, checking particularly for chemistry relevant to whether an environment can support or could have supported life.

As the sample is baked to release its gases, SAM's three instruments begin their work to give Curiosity a "taste" of Mars. SAM carries out the following steps.

Thermal release and identification of the molecules:


As the sample is heated, gases are released. SAM's Quadrupole Mass Spectrometer sniffs a small fraction of this gas to identify these gases by measuring their mass-to-charge ratio. The signature of the release with temperature helps identify the minerals that are breaking up to produce this gas. The QMS directs high-speed electrons produced from a hot filament at the molecules, breaking them up into fragments and giving the molecules and their fragments an electric charge. These molecules and their fragments with an electric charge can be moved by electric fields. The QMS uses both direct and radio frequency fields to sort the electrically charged molecules and fragments based on their mass. Molecules and fragments of different mass are counted by a detector at different times to generate a mass spectrum, which is a pattern that uniquely identifies molecules.

Measurement of trace species and heavy and light atoms in molecules:


During the heating of the sample a portion of the gas is directed into the Tunable Laser Spectrometer (TLS), which can identify and analyze certain volatile molecules, like the trace species methane and carbon dioxide. A gas sample is valved off in a chamber with precisely positioned mirrors at both ends. A laser is fired through a tiny hole in one of the mirrors. As the laser light bounces between the mirrors, it illuminates the sample. Different molecules will absorb certain colors (frequencies) of light, so the TLS identifies the molecules by which colors of the laser are blocked (since the laser is tunable, it can be adjusted to shine in a range of colors). The TLS can also identify isotopes the same way. Isotopes are versions of an element that are a little bit heavier because their nucleus contains more neutrons. For example, carbon 13 is an atom of carbon with an extra neutron, so it is a heavier version of the more common carbon 12. Occasionally, a carbon 13 will take the place of a carbon 12 in an organic molecule. This is important because both microbial processing of chemicals and various physical processes such as those that may have removed a fraction of the atmosphere of Mars over time leave their signature in isotopic composition. Finally, since volatile molecules are found in the atmosphere as well as in soil and rock, samples of the Martian air can be sent directly to the TLS without going through SAM's other instruments. 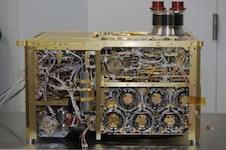 SAM's three instruments are visible in this view taken before installation of its side panels: the tunable laser spectrometer (TLS) at lower left, the quadrupole mass spectrometer (QMS) at upper right, and the gas chromatograph (GC) at lower right. SAM's solid sample inlet tubes (SSIT), visible at top right, are the routes by which Curiosity's robotic arm delivers samples of soil and powdered rock for analysis.
Credit: NASA
› Larger image
› Larger image (labeled)

After the TLS measurement is complete gases trapped during the heating process are introduced to the Gas Chromatograph (GC) instrument. The purpose of this instrument is to sort out the different molecules in the sample, and to tell how much of each kind there is. The GC accomplishes this by using a stream of helium gas to push the sample down a long, narrow tube (which is wound into a coil to save space). Helium is used because it is inert, meaning it won't react with and change any of the sample molecules. The inside of the tube is coated with a thin film. As molecules travel through the tube, they stick for a bit on the film, and the heavier the molecule, the longer it sticks. Thus, the lighter molecules emerge from the tube first, followed by the middleweight molecules, with the heaviest molecules bringing up the rear. Since molecules of different weights emerge from the tube of the gas chromatograph at different times, the GC can send groups of different weights, one at a time, to SAM's QMS, which will determine exactly what kind of molecule makes up each of the groups. This Gas Chromatograph Mass Spectrometer mode of operation is a key tool in SAM's search for organic compounds on Mars.