Its mission: To ensure that every craft is space-ready.

In order to meet flight spacecraft qualifications, a craft must be able to operate in three high-stress environments: the trauma of launch, the vacuum of space, and the electromagnetism from both background radiation and the craft itself. To prove their mettle, every component must endure a series of brutal tests, from surviving temperature swings of hundreds of degrees to holding together under the gravitational force of a car crash.

Inside the Chamber of Horrors

Behind the innocuous front door of building seven, a maze of cavernous rooms hums with fans and grinding machinery. This is where the testing begins.

On the far side of a high bay area so tall that only cranes can reach its top shelves, a vast circular room houses the 120-foot-long High Capacity Centrifuge. Built to test the effects of increased gravity on assembled spacecraft, the centrifuge can accelerate a 2.5-ton payload up to 30 Gs—many times more force than it would experience during a launch. It’s not just used for NASA projects; in 2003, the National Highway Traffic Safety Administration (NHTSA) used the centrifuge to study rollover in SUVs, gauging the acceleration force at which their wheels would lift from the centrifuge platform.

Through a set of insulated steel doors nearly a foot thick hides the Acoustic Test Chamber, where spacecraft are exposed to the earsplitting noise (and resulting vibration) of launch. The doors are usually closed, concealing the 42-foot-tall room and its two huge horns, a pair of speakers capable of producing sounds as loud as 150 decibels. That’s about the equivalent of standing directly in front of a refrigerator-sized speaker at a rock concert.

Around a corner sits the Thermal Vacuum Chamber, the biggest, baddest vacuum chamber in the facility. At 40 feet tall, this behemoth can run tests on even the most massive of spacecraft. To simulate the environment of deep space for the James Webb Space Telescope, the chamber needs to reach temperatures close to the universe’s baseline of -454.8 F (2.7 K), but its liquid nitrogen cooling system only hits -272.5 F (104 K). Scientists have retrofitted the chamber with an enormous shroud, enabling them to cool the chamber with liquid helium instead and reaching temperatures of -434.5 F (14 K). 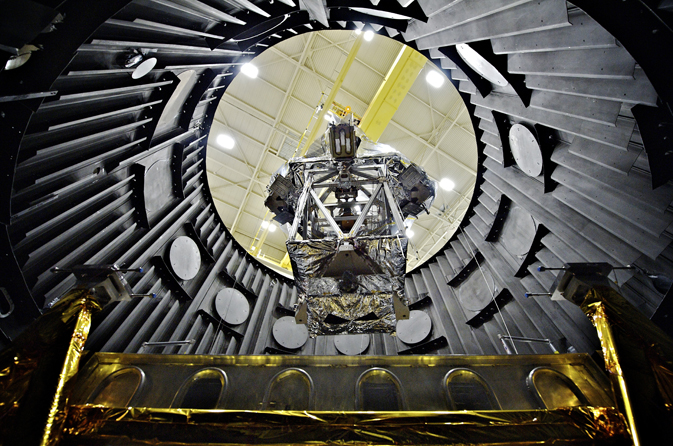 The James Webb Space Telescope's OTE (Optical Telescope Element) is lowered into the Thermal Vacuum Chamber, where scientists will test its ability to operate at the subzero temperature of space. (Credit: NASA Goddard/Chris Gunn)
› Larger image
The facility also houses to the largest clean room in the world. With a volume of roughly 1.1 million cubic feet, the High Bay Clean Room is the assembly site for many of NASA’s largest spacecraft, including the James Webb Space Telescope. A wall of air filters four times the size of a tennis court maintains its class-10,000 rating, guaranteeing fewer than 10,000 particles of debris 0.5 microns in diameter—200 times smaller than the width of a human hair—per cubic foot of air.

So why do we test spacecraft on the ground?

“It’s better that we test them here, and have something go wrong here, and fix it here,” says Carmine Mattiello, the branch head of the Environmental Test Engineering and Integration branch. Once the craft is launched, “it doesn’t do anybody any good if it’s just orbiting around and it’s broken or it doesn’t want to perform the way it’s supposed to.”

The standardized set of tests is customized for each item, depending on factors like its position in the launch vehicle and the nature of the mission. This flexibility is designed to counter the risk of over-testing, which could overstress sensitive hardware and decrease the instrument’s chances of success.

“You don’t want to over-test, but at the same time you want to do enough testing to assure yourself that it’s actually going to be able to do its job,” Mattiello says.

Besides, if a craft survives testing, there’s always the promise of cake.