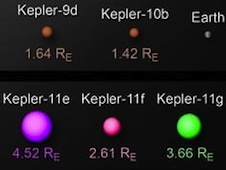 This is a sample from a Spacemath@NASA problem. This diagram shows disks representing the planets discovered in orbit around eight different stars all drawn to the same scale. Earth and Jupiter are also shown for size comparison. This lesson asks the viewer to solve problems using fraction arithmetic to find out how big these new planets are compared to Earth and Jupiter. Credit: SpaceMath@NASA

NASA today announced that Houghton Mifflin Harcourt (HMH), Boston, has incorporated math problems developed by the SpaceMath@NASA program into some of its latest curriculum and educational products. SpaceMath uses the latest discoveries from NASA's space science missions to develop grade-appropriate math problems spanning all of the contemporary mathematics topics areas in formal education.

"We are proud of the partnership with HMH, especially at a time when a vibrant, national science, engineering, technology, and math (STEM) education program is a major priority," said astronomer Sten Odenwald of ADNET Systems, Inc., Lanham, Md. "SpaceMath@NASA has partnered with a major STEM education solutions provider to help students see the deep connections between math and science using NASA and space exploration as a theme." Odenwald, who is stationed at NASA's Goddard Space Flight Center in Greenbelt, Md., leads a team of education and public outreach (E&PO) professionals who develop the SpaceMath materials.

"Other education companies are welcome to work with SpaceMath and follow HMH’s example," says Odenwald. "The informal partnership entails periodic consultation with the company to understand its interests and what types of content best suits its goals. We then build modules on the SpaceMath@NASA website that contain as many content requests as we can accommodate. In turn, we can offer our NASA-version of these modules for open access by all visiting teachers, while HMH is free to download those module elements to populate their own Web pages and books."

SpaceMath products, simple one-page problems featuring a NASA discovery or engineering issue, are designed for direct classroom use by students in grades 3 through 12 using authentic, on-grade-level math topics rooted in real-world science and engineering data. It was developed in 2003 to help NASA missions upgrade their E&PO offerings by explicitly integrating mathematics problems into the science content. It was also specifically designed to meet the needs of the No Child Left Behind classroom environment where short, targeted math problems in a one-page format were now becoming the preferred method for presenting a variety of math experiences.

Problems are commonly extracted from NASA press releases and written to feature some surprising but quantifiable aspect of an image or discovery that can be paraphrased as simple mathematical problems. "These can be as diverse as a problem on fractions and percentages using Kepler exoplanet data, or as involved as determining the volume of Comet Hartley-2 using integral calculus," said Odenwald.

"We are very excited to partner with NASA," said Jim O’Neill, Senior Vice President, Portfolio Strategy and Marketing Management for HMH. "By incorporating the resources provided by SpaceMath@NASA into our programs, HMH can help develop students’ critical thinking skills through real-world applications that are taken from the headlines. These STEM activities also highlight the pedagogy of the Common Core for Mathematics by strengthening students’ abilities to apply concepts and integrate the Standards for Mathematical Practice."

"Our partnership with HMH has grown out of a 10-year collaboration with them, so we consider them a major partner for future resource development," adds Odenwald.

SpaceMath was originally funded by NASA's E&PO programs for the IMAGE and Hinode missions. Since 2008, the program has been funded by two grants from the NASA Science Mission Directorate at NASA Headquarters, Washington – through the Research Opportunities in Space and Earth Sciences/Education and Public Outreach for Earth and Space Science (ROSES/EPOESS) program.

"Funding at the Directorate level has been crucial in allowing SpaceMath to utilize all of NASA's press releases and extensive resources as subject matter for mathematics problems, rather than focusing exclusively on only a few NASA missions and science themes," said Odenwald.

SpaceMath@NASA resources can be found at: