Grow Text SizeShrink Text Size
Goddard Gears Up for Curiosity's Mars Landing
While the Curiosity rover hurtles toward the Martian surface on the night of August 5, people across the country and around the world will eagerly await word of its safe arrival.

The Mars Science Laboratory (MSL) and its rover Curiosity make up the newest robotic mission to the Red Planet. Curiosity carries a suite of advanced scientific instruments designed to study the geology and geochemistry of the Martian surface, looking for clues about past habitability. 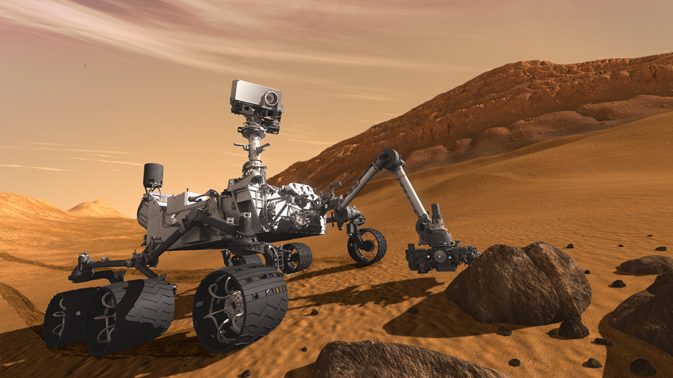 This artist concept features NASA's Mars Science Laboratory Curiosity rover, a mobile robot for investigating Mars' past or present ability to sustain microbial life. (Credit: NASA/JPL-Caltech)
› Larger image
With the eight-month flight to Mars nearly over, attention has turned to Curiosity’s landing procedure, which will combine existing and new technologies to deliver the car-sized rover to the surface. While previous Mars landers relied on enormous air bags to bounce and roll to a stop, the larger and heavier Curiosity rover will be slowed by a parachute and then lowered to the surface with a sky crane.

Curiosity is scheduled to touch down at 1:31 a.m. EDT, when Mars Odyssey, one of three spacecraft orbiting Mars (along with NASA’s Mars Reconnaissance Orbiter and ESA’s Mars Express), will fly by to confirm the rover’s landing in Gale Crater. This landing site was selected for the uniquely exposed rock layers within the crater, which contain an extraordinary record of the geologic history of Mars. 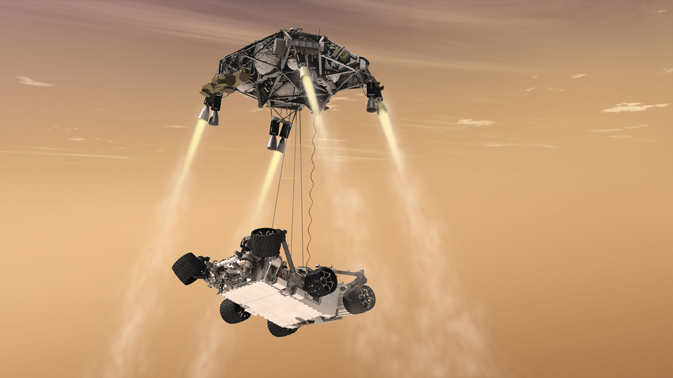 This artist's concept shows the sky crane maneuver during the descent of NASA's Curiosity rover to the Martian surface. (Credit: NASA/JPL-Caltech)
› Larger image
A live celebration of Curiosity’s landing will be held at Goddard’s Visitor Center on August 6 from midnight until 3:30 a.m. EDT.

Registration for this exciting event, intended for adults and families with high school-aged children, filled up several weeks ahead of time. The event will include presentations about Curiosity and SAM (Sample Analysis at Mars), the rover’s Goddard-built instrument suite; a 3-D Mars image gallery; information about other Goddard planetary missions; and telescope viewings with the Goddard Astronomy Club.

SAM scientists Melissa Trainer and Amy McAdam will give an overview of the mission. Brent Garry of NASA Desert RATS (Research and Technology Studies) will discuss the future of exploration on the moon and Mars. At the Science on a Sphere exhibit, Education and Public Outreach Program Manager Michelle Thaller will present information about other exciting science happening at Goddard.

Live footage of Curiosity news briefings and landing commentary will be featured on NASA TV throughout the night.

A press conference at NASA Headquarters in Washington will follow the landing at 2:15 a.m. EDT.

Goddard also hosted events for employees and the public leading up to the landing celebration.

On Saturday, July 28, families with young children were invited to the Goddard Visitor Center to learn about Mars and the Curiosity mission. SAM scientists and engineers presented talks about the mission. Hands-on activities included Drilling Mars Rocks, where kids bored into chocolate-coated candy bars to learn why rovers drill into rocks on Mars. Visitors also tried Mars Cookie Geography, using chocolate chip volcanoes, Smarties craters, and frosting ice caps to examine the location of Gale Crater relative to other familiar features on the Martian surface.

An employee overview of Curiosity and SAM took place on July 30.