Grow Text SizeShrink Text Size
Testing at Goddard: The Astrobiology Analytical Lab
When Daniel Glavin isn't designing a chemistry experiment to run from millions of miles away, he's a researcher in the Astrobiology Analytical Laboratory at NASA's Goddard Space Flight Center in Greenbelt, Maryland, where scientists are working to solve two of the biggest mysteries facing humanity: How did we get here? And are we alone?

The answers may lie in carbonaceous meteorites.

Defined according to their organic matter (carbon) content, carbonaceous chondrites make up about four percent of all meteorite falls on Earth. These carbon-rich meteorites are more likely than their carbon-poor counterparts to contain the chemical predecessors of life, such as amino acids, sugars, and nucleobases, the raw material for DNA and RNA.

"Yes, it's not life yet—these are the precursors for life—but the idea that our building blocks are forming just in space, without any influence from biology, is cool," Glavin says.

In the hunt for organic material, the Astrobiology Analytical Laboratory focuses on meteorites from carbon-rich asteroids. Using less than a gram of meteorite powder (about three one-hundredths of an ounce), researchers run a series of experiments to tease out a sample's organic components, identifying signature amino acids and analyzing their abundance and chirality, or handedness, for indications of biological influence. 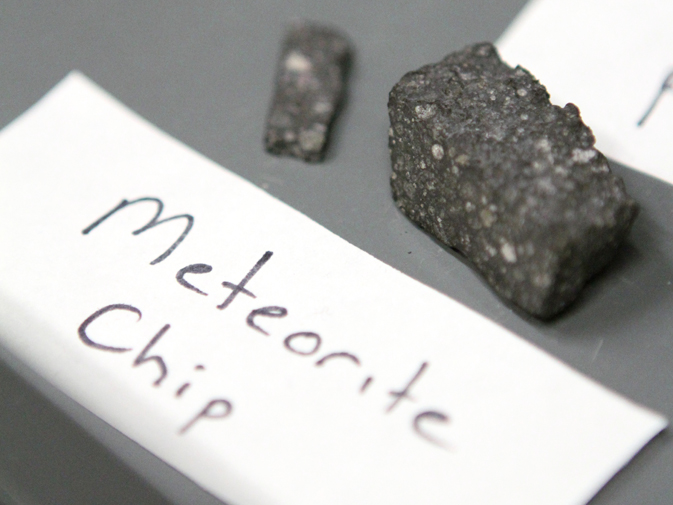 Scientists in NASA Goddard's Astrobiology Analytical Laboratory use small pieces of carbonaceous meteorites, like the ones shown here, to study the chemical precursors for life. (Credit: NASA Goddard/Becky Strauss)
› Larger image
Scientists hope to apply the same detection techniques they use on meteorites in the lab to search for carbon on the surface of Mars. With the help of its powerful onboard chemistry lab, the Sample Analysis at Mars (SAM) suite, the Curiosity Mars rover will kick off the latest installment of our search for signs of life on other planets.

If the assortment of meteorites found on Earth is any indication, carbon-rich meteorites must have impacted the Martian surface at some point during its 4.5 billion-year history—but scientists haven't found them yet.

"The truth of the matter is we've never detected a carbonaceous meteorite on Mars," Glavin says. Without a protective atmosphere, harsh Martian surface weather, including violent windstorms that carry abrasive dust, can break apart rocky material over millions of years. Carbonaceous meteorites may have been worn away faster than their dense iron siblings, which previous missions have detected. "It's possible that if there is any carbonaceous material from meteorites, it's just part of the soil," Glavin says.

Scientists can use erosion rates to estimate expected percentages of meteorite material in the Martian soil, but direct measurement has been impossible—until SAM. 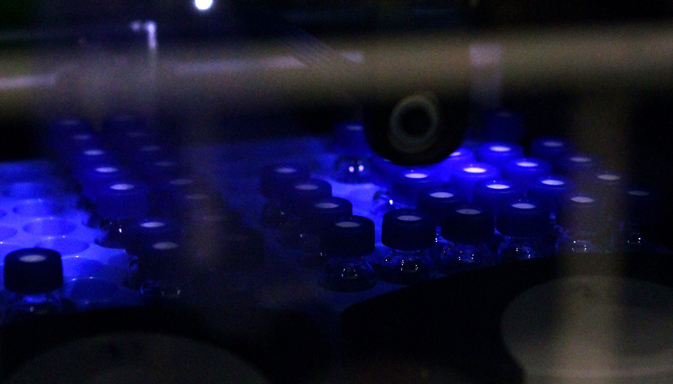 A liquid chromatograph mass spectrometer in NASA Goddard's Astrobiology Analytical Laboratory analyzes carbonaceous meteorite extracts. (Credit: NASA Goddard/Becky Strauss)
› Larger image
The SAM suite is essentially a compressed version of the Astrobiology Analytical Lab, about the size of a microwave. Equipped with a miniature wet chemistry toolkit, SAM will follow the same steps scientists take to analyze organic material on Earth, heating samples to free up amino acids and other organic compounds and passing the resulting vapor through 90 feet (30 meters) of narrow tubing to separate out its volatile components.

Every test is a multi-step process; a team of scientists here on Earth must evaluate each experimental protocol before SAM carries it out on Mars. By conducting a first run in the Astrobiology Analytical Lab, scientists can remotely calibrate SAM, checking its results against the outcomes of analogous experiments on Earth.

"We're trying to understand what the capabilities and limitations are for SAM, and how the information obtained would compare to the same laboratory-based measurements of the sample if we were able to return it from Mars—what additional information would we learn?" Glavin says.

The Future of Astrobiology

With an impressive list of capabilities, SAM is the next best thing to studying a sample in the lab itself. However, even SAM has limitations. For astrobiologists and other scientists to acquire the best possible results, they must bring samples back to Earth.

"This is the next step for trying to answer this question about life on Mars, short of sending humans there," Glavin says. If extraterrestrial material could be delivered directly from a planet or asteroid to the lab, issues related to terrestrial contamination and alteration of the samples from heating during atmospheric entry would be greatly reduced.

Sample return would also resolve the question of sourcing. Without direct collection, it can be difficult to track down a meteorite's parent body.

"A lot of these asteroids hit each other and deliver [material], so they're kind of a conglomerate of different types of asteroids," Glavin says.

"They're puzzles that we try to figure out. It's not easy."

The astrobiology team is looking forward to the launch of OSIRIS-REx, which will travel to a near-Earth carbonaceous asteroid and, for the first time, collect samples to bring back to Earth.

In the meantime, hopes are high (and fingers are crossed) that SAM will send home exciting data within a few months of the Curiosity landing. Even if organic carbon remains elusive, the mission will have far-reaching implications for our understanding of Mars.

"Mars is a very complicated place," Glavin says. "Every time we go there, we learn something new that changes the way we think about the Red Planet."