Women of NASA's Goddard Space Flight Center in Greenbelt, Md., are highlighted in a new book and a set of six posters in an exhibit at the Maryland Women's Heritage Center.

The Maryland Women’s Heritage Center is located at 39 West Lexington Street, Baltimore, Md. Its mission is "to preserve the past, understand the present, and shape the future by recognizing, respecting, and transmitting the experiences and contributions of Maryland women and girls of diverse backgrounds and regions." 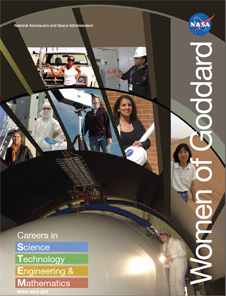 › View larger
Cover of new Women of Goddard Book. The idea for Goddard's involvement began in November 2010, when Mary Cleave, a former NASA astronaut and former Goddard employee, contacted NASA Goddard climatologist Claire Parkinson to tell her that the Maryland Women's Heritage Center was in the initial stages of planning a major exhibit on Maryland women in science, technology, engineering, and mathematics careers.

Cleave noted that there was no Goddard involvement in the planning. To correct that, Parkinson organized a brainstorming session at Goddard in January 2011. At the end of that meeting, Parkinson and Pamela Millar, Chief of Goddard’s Laser Remote Sensing Laboratory, agreed to take the lead on a “Women of Goddard” book to contribute to the exhibit.

There were 101 submissions, and Parkinson wrote entries for Beth Brown and Joanne Simpson, two former Goddard employees who are deceased.

Goddard multimedia specialist Jay Friedlander took on the task of creating the book's layout, while Parkinson concentrated on the editing. The final book, entitled "Women of Goddard: Careers in Science, Technology, Engineering, and Mathematics", showcases the extraordinary work of Goddard women and their contributions to NASA’s mission.

In addition to the book, the Maryland Women’s Heritage Center provided display space for six posters. Parkinson, with help from Cleave regarding the shuttle missions, plotted out the posters based largely on the book. The six posters highlight the book, the Hubble Space Telescope mission, the Sample Analysis at Mars project, the shuttle missions, the Aqua Earth science mission, and Goddard management, respectively.

Starting in August, after the book was sent to the printers, Parkinson worked closely with Kevin Miller, a multimedia specialist who works in the Earth Observing System Project Science Office at Goddard, to prepare the posters. The six posters were completed and sent to the printers in October.

Parkinson has worked at Goddard for over 33 years. She said, "The Women of Goddard project reflects the huge appreciation that many of us in the book and on the posters have for our NASA careers, and we hope that the book and posters will energize young people to study STEM subjects and consider pursuing STEM careers. The project also has been wonderfully positive in terms of making many of us a lot more aware of the work of other women at Goddard, spurring on some networking and increased camaraderie."

The posters and the book are being highlighted at the new exhibit on Maryland Women in Science, Technology, Engineering, and Mathematics at the Maryland Women's Heritage Center in downtown Baltimore, Md. The exhibit opened on November 14, 2011, and is expected to be open for at least one year.

To learn more about the Maryland Women's Heritage Center, visit:

For information about the Women@NASA program, visit:


Download the "Women of Goddard" book and related posters: