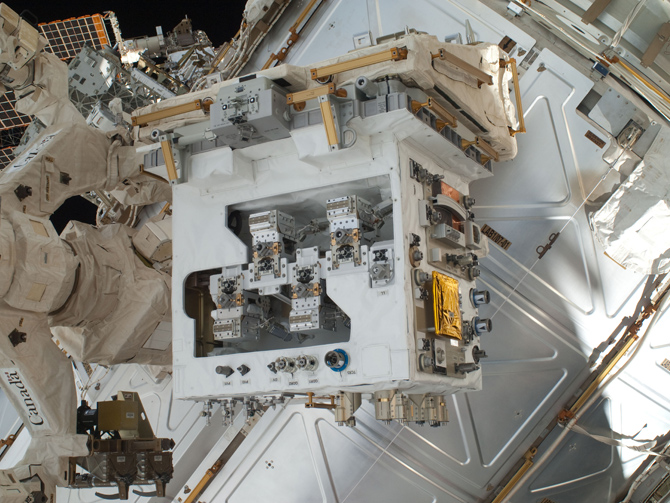 A joint effort between NASA and the Canadian Space Agency, RRM is designed to demonstrate the technologies, tools, and techniques needed to robotically service satellites, especially those not built with servicing in mind.

The results of this two-year technology test bed are expected to the reduce risks associated with satellite servicing as well as lay the foundation and encourage future robotic servicing missions. Such future missions could include the repair and repositioning of orbiting satellites.

President Obama called the RRM demonstration “innovative” during a July 15 phone call to STS-135 astronauts onboard the ISS noting its potential future benefits to the commercial satellite industry. “It’s a good reminder of how NASA technology and research often times has huge spillover effects into the commercial sector, and makes it all that much more important in terms of peoples’ day to day lives.”

Launched to the ISS in July onboard the last shuttle mission, RRM marks the first use of the space station’s Dextre robot beyond robotic station maintenance for technology research and development. It is also the first on-orbit demonstration to test, prove and advance the technology needed to perform robotic servicing on spacecraft not designed for refueling and repair.

The RRM module is about the size of a washing machine and weighs approximately 550 pounds, with dimensions of 33" by 43" by 45.” RRM includes 0.45 gallon (1.7 liters) of ethanol that will be used to demonstrate fluid transfer on orbit. 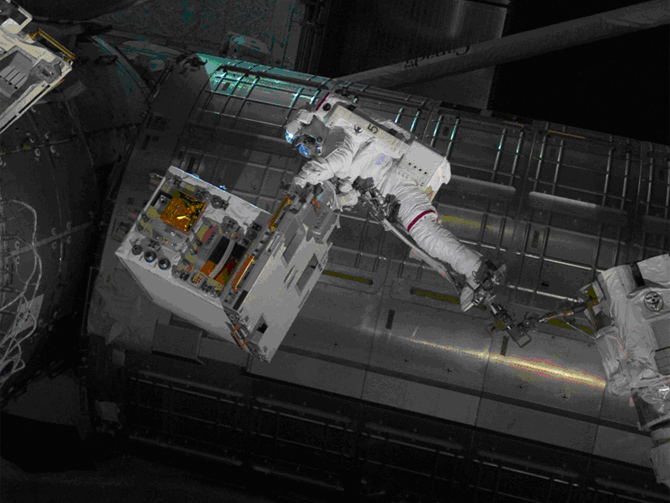 On July 12, space station astronauts Mike Fossum and Ron Garan removed the RRM module from the cargo bay of shuttle Atlantis and placed the module onto a temporary platform on the Dextre robot. In September, the Canadarm2 robot will permanently secure RRM on the ExPRESS Logistics Carrier-4 (ELC-4), an external platform also built at Goddard. The ISS will provide command, telemetry and power support for the module through ELC-4 during the experiment’s two-year window of operations.

After the transfer to ELC-4, mission operators will release the launch locks on the four RRM tools to be used at a later date by Dextre. This will be followed by a series of vision tasks, to develop machine vision algorithms against the harsh lighting on orbit verifying the RRM can see during future demonstrations.

The first set of refueling demonstration tasks are currently scheduled for January 2012. These activities will verify that on-orbit satellite repairs can be performed with today’s technology.

Satellite servicing with astronauts is not new for NASA. Skylab, NASA's first space station, was repaired in space in 1973. Solar Maximum and Syncon IV, with help from the shuttle, were successfully repaired in the 1980's. In the 1990's NASA serviced the Compton Gamma Ray Observatory, Intelsat 6 and executed a series of highly successful servicing missions to the Hubble Space Telescope.

"You know NASA has been doing space servicing for quite some time now," said Cepollina. "We will be demonstrating abilities that will allow for the servicing of existing satellites and could influence the build of future satellites to allow easy on-orbit access for refueling and repair."

More recently, human and robotic servicing capabilities have contributed to the assembly, upkeep and repair of the ISS. With RRM, NASA can begin the work of confirming the robotic satellite-servicing technologies needed for the development of future robotic servicing spacecraft.

Cepollina believes it is just a matter of time before such servicing could become routine. "If we are to venture further from Earth, the need for robotic servicing will increase," said Cepollina. "With the build of the space station we see the increase of collaboration between human and robotic abilities in space servicing."

Included within the RRM module are four unique tools developed at Goddard: the Wire Cutter/Blanket Manipulation Tool, the Multifunction Tool, the Safety Cap Removal Tool, and the Nozzle Tool. Each tool will be stowed in its own storage bay until Dextre retrieves it for use. Each tool contains two integral cameras with built-in LEDs to give mission controllers the ability to see and control the tools.

Drawing upon 20 years of experience servicing the Hubble Space Telescope, NASA’s SSCO initiated the development of RRM in 2009. Atlantis, the same shuttle that carried tools and instruments for the final, astronaut-based Hubble Servicing Mission 4, launched RRM to space. The last shuttle mission carried the first step to robotic refueling and satellite servicing to orbit—a new era sprung from the old.