“We held Explore@NASA Goddard to show everyone all the impressive and important things NASA does,” said Michelle Jones, of Goddard’s Office of Communications. “We are incredibly fortunate to be able to do what we do on behalf of the American people, and we’re excited to invite the public to see how we are improving life on Earth." 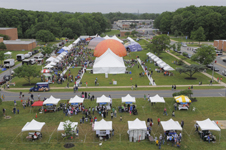 More than 15,000 guests visited the center on May 14 for the Explore@NASA Goddard open house. Credit: NASA Goddard/Pat Izzo
› Larger image 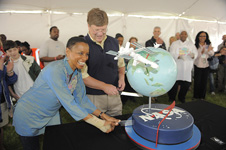 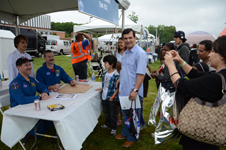 › More images on Flickr Goddard is a preeminent research center for Earth science and home to Hubble Space Telescope operations, as well as the upcoming James Webb Space Telescope and dozens of other missions that study our planet, our solar system and the universe. Exhibits on these subjects and many, many more entertained the day’s guests.

Visitors met with astronauts John Grunsfeld and Scott Altman, snapped photos of Darth Vader and other Star Wars characters, and took in live entertainment from The Chromatics, Sweet Honey in the Rock, and other groups.

Tours included stops at Goddard’s television studios, the Visitor Center for “Science on a Sphere” presentations, as well as Goddard’s clean room and other satellite testing and construction facilities. “We got to see the James Webb [Space Telescope] mirror in the clean room,” said Michelle Rosen, a mechanical engineering major at the University of Maryland. “That was awesome!”

Kids and their parents were able to construct their own satellites, rockets, and anything else in their imaginations, thanks to some 750,000 bricks (about a ton’s worth) on loan from LEGO.

Yolanda Lawson and her three children were visiting Goddard for the first time. “The LEGOs took me back to when I was a kid,” she said. “We loved it. We’ll definitely be back.” (Yolanda’s son Donte was working on a “creation for when you go into space.”)

The Goddard Mall was filled with food vendors, music, and science presentations and demonstrations. Tami J. and her son enjoyed the flight simulators and hovercraft on display from Traveling Space Museum Inc. “I’m really impressed,” she said. “We saw Sweet Honey and the Rock, which was amazing. My son’s been on the moon bounce, like, five times. It’s all amazing.”

"It's an incredible feeling to see the culmination of hard work and months worth of planning come together in such a fantastic way," said Leslee Cork, of Goddard's Office of Communications. Cork led overall event organization efforts. "All the guests I spoke with mentioned that they were looking forward to our next open house. Knowing that these visitors enjoyed themselves is a reward in itself."