Grow Text SizeShrink Text Size
Turning up the heat: Finding out how well the Webb telescope's sunshield will perform 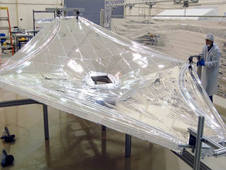 This is one of the Webb Telescope 1/3 scale sunshield membranes undergoing final inspection at Nexolve in Hunstville, Ala. Credit: Nexvolve
› Larger image 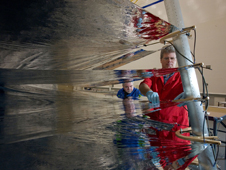 Photo of an engineer handling the sunshield membrane on the 1/3 scale model. The five-layer sunshield consists of thin membranes made from a polymer-based film and supporting equipment such as spreader bars, booms, cabling, and containment shells. Credit: Northrop Grumman
› Larger image Keeping an infrared telescope at very cold operating temperatures isn't an option, it's an absolute necessity. For the James Webb Space Telescope to see the traces of infrared light generated by stars and galaxies billions of light years away, it must be kept at cryogenic temperatures of under 50 Kelvin (-370°F). Otherwise, sunlight would warm the telescope and this heat from the telescope itself will swamp the very faint astronomical signals, effectively blinding the telescope's eye. The job of the huge, five-layer sunshield is to keep that from happening.

Serving as a radiation blocker, the sunshield is subjected to nearly 100,000 thermal watts of solar heat, and reduces that to one tenth of a watt on the cold side, a million to one reduction.

But how do you test a complicated structure the size of a tennis court? There isn't a cryogenic chamber on the planet big enough and building one doesn't make sense from a budget and practical standpoint. So Webb engineers have constructed a 1/3-scale model and a test facility to perform the critical thermal test of the sunshield system.

The thermal test had two main goals: 1- to verify that the sunshield design can actually block and redirect the sun's energy before it reaches the telescope; and 2- to verify the accuracy of computer thermal models used to predict how the full-size sunshield will perform. "The flight sunshield will be deployed and visually inspected prior to flight, but only a computer simulation of its thermal performance will be used to determine if it's ready to launch," explains Keith Parrish, Webb telescope Sunshield Manager at NASA's Goddard Space Flight Center, Greenbelt, Md.

Simulating the sun's heat
In space, the sunshield will be heated by the sun. For ground testing, the 1/3-scale model was placed in a thermal vacuum test chamber at lead contractor Northrop Grumman's manufacturing facilities in Redondo Beach, Calif. The sun's heat was simulated by electrical heater plates placed very close to, but not touching layer 1, the warm sun- facing layer. Power to the heaters was steadily increased until layer 1 reached similar temperatures as those expected in flight, well over 100 degrees C (212°F, the boiling point of water at sea level).

Measuring how the sunshield reacts
Approximately 400 temperature sensors were placed all over the sunshield. "We also keep an eye on the chamber's gaseous helium-refrigerated shroud temperatures and liquid helium cooling plates," adds Parrish. "These cooling plates simulate the cold background temperature of space at the orbit of Webb, which is around 7 Kelvin (-446.8°F). We can't get these plates all the way down to 7 K, which is pretty close to absolute zero. The plates typically get down to the 15 to 25 K (-434.4°F. to -414.4°F) temperature range, so exact knowledge of their temperature is critical to understanding the sunshield's performance."

The engineering team used the 1/3-scale tests for a trial run of a device called a radiometer. Hung or mounted around the sunshield, these devices measure the heat radiation that is bouncing around and between the sunshield, the cold plates and the chamber walls. Since this kind of effect doesn't occur in space, it's important to understand how this heat bouncing impacts the test results. When the flight instruments and observatory are tested at Goddard and Johnson Space Center, these devices need to be working well.

Matching models to test data
After the temperature data was gathered, engineers ran computer models over and over again with small changes to mimic the actual test conditions. The goal is to better match the temperature data from the sensors on the sunshield to the computer models. "This is really the critical part in the whole testing process," says Parrish. "Gathering the test data was just the beginning. Understanding that data and how it applies to the flight sunshield's predicted thermal performance is the critical step."

To understand how the membrane shape affects thermal performance, a Light Detection And Ranging (LIDAR) laser device took highly accurate shape measurements on each of the five layers of the sunshield at room temperature. These measurements were used to validate the computer model predictions of each membrane under ambient conditions. The computer models were then used to predict the membrane shapes over the various test conditions.

Later this spring, the thermal chamber will be modified with a window so that the LIDAR device can see into the chamber and measure the shape of layer 5, the coldest layer, near its cryogenic operating temperature, approximately 77 K (-320.8°F). This test will allow the engineers to confirm if the computer model's prediction of shape at temperature is correct.

Analyze and verify
Careful planning and following rigorous procedures paid off – the test was very successful because all test objectives were met and engineers were able to collect the data they needed. That data is being carefully analyzed to see if the test temperatures accurately reflect the thermal performance of the flight sunshield. Data analysis is a lengthy process scheduled to be complete by the end of March 2010.

The 1/3-scale tests go a long way in establishing model verification well in advance of the flight test. As a result, the fidelity of the master model is improved, which adds flight confidence and reduces technical risk.