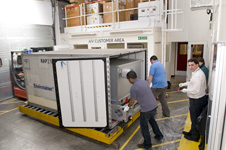 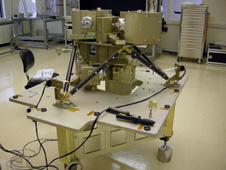 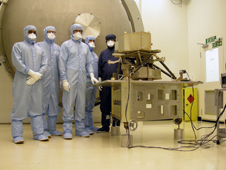 Scientists and Engineers in a clean room at the Science and Technology Facilities Council’s Rutherford Appleton Laboratory with the model of the MIRI instrument. Credit: Science and Technology Facilities Council (STFC)
› Larger image The next generation space telescope continues to come together at NASA's Goddard Space Flight Center in Greenbelt, Md., with the arrival of the "Mid Infrared Instrument."

A working replica of MIRI or Mid InfraRed Instrument – the pioneering camera and spectrometer for the James Webb Space Telescope - has just arrived at NASA Goddard. It was shipped from the Science and Technology Facilities Council’s Rutherford Appleton Laboratory (STFC/RAL) in the United Kingdom.

MIRI's arrival to Goddard brings the James Webb Space Telescope one small step closer to embarking on its journey into space where it will produce the sharpest images yet of the farthest depths of the cosmos.

"Receipt of the MIRI structural thermal model (STM) represents a major milestone in eight years of development work by the joint European Space Agency (ESA) and NASA Jet Propulsion Laboratory (JPL) instrument team," said Matt Greenhouse, Project Scientist for the Webb telescope Science Instrument Payload at NASA's Goddard Space Flight Center, Greenbelt, Md. "Tests with this prototype model of the MIRI, conducted at Rutherford Appleton Laboratories in the U.K., have shown that this science instrument is on track to meet all of its performance requirements. Upon receipt of the STM, Goddard engineers will begin testing it with supporting systems in the Webb telescope Integrated Science Instrument Module to facilitate smooth integration of the flight model."

The Webb telescope is a joint collaboration between NASA, ESA and the Canadian Space Agency. Webb is a large, cold orbiting infrared observatory that will succeed the currently operating Hubble Space Telescope. With the help of MIRI and its three other sophisticated instruments, it will be able to examine the first light in the universe and investigate the evolution of galaxies and the process of star and planet formation – helping to answer some of the fundamental questions about the origin of our universe.

MIRI is an infrared camera and spectrometer that will operate as part of the Webb telescope to observe the universe at wavelengths that are difficult or impossible to observe from the ground. It is an international project combining the talents of a consortium of European partners, the ESA, and an international science team with those of scientists and engineers at NASA’s JPL.

They assembly of the MIRI Structural Thermal Model was created as a result of a large collaborative effort. It was assembled at the STFC RAL in the U.K., from modules built by the University of Leicester, U.K.; the French Atomic Energy Commission, France; Centre Spatial de Liége in Belgium; NASA's JPL; Nova-Astron in the Netherlands; STFC’s U.K. Astronomy Technology Center (ATC); and the Danish National Research Center in Copenhagen, Denmark, with system engineering, product assurance and management provided by Astrium Ltd., Leiden, the Netherlands.

MIRI has already been subjected to an extensive series of tests in the U.K., and later this year it will be used at NASA Goddard for pre-integration testing with the Integrated Science Instrument Model – the key element of the Webb telescope that holds all four instruments in the correct positions. Meanwhile engineers across Europe and the U.S. are pressing ahead at full speed to build the flight instrument, which is due for delivery next year.

"The MIRI team is delighted to have reached this important technical milestone after many years of design and development work for the instrument" said the European Principle Investigator, Gillian Wright of STFC’s U.K. ATC.

George Rieki, MIRI Science Team Lead at University of Arizona, Tucson added, "It is inspirational to see how well the team has worked to make this happen. It is another big step toward making MIRI a reality."

When launched in 2014, the Webb telescope will have a set of four instruments, including MIRI. MIRI will provide enormous increases in sensitivity, spatial and spectral resolution for three key reasons: First, its location in space will remove the blocking and large background noise effects of the atmosphere which limit ground-based telescopes. Second, the Webb telescope is cooled to a very low temperature, reducing the emission from the telescope and greatly improving its performance. Third, the Webb will have a far larger mirror then any other infrared space telescope, giving improved angular resolution and collecting area. This combination makes the Webb a very powerful space observatory which promises to revolutionize our view of the cosmos yet again - just as Hubble did.

The U.K. is playing a key role in the Webb telescope with the STFC leading the European development of the MIRI Optical System. This U.K. contribution includes leadership by the European principal investigator based at STFC’s UK-ATC; Astrium Ltd. providing the project management, PA, and system design/engineering; STFC's RAL responsible for the assembly, verification and test and the thermal systems work; STFC’s U.K. ATC designing and building the spectrometer pre-optics module; and the University of Leicester leading the structure and mechanical systems work for MIRI.

Dr. David Parker, Director of Space Science and Exploration at the British National Space Center, said, "With the delivery of this sophisticated replica of MIRI, we’ve reached another important milestone in the build of this new window on the ancient universe. Right now, the U.K. is involved in many exciting, new space projects. With the upcoming creation of a U.K. executive space agency we will ensure that the U.K. continues to play key roles in amazing discovery machines like the Webb telescope."