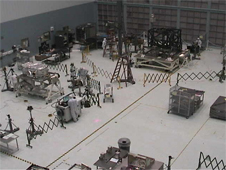 Screen capture from the clean room "Webb-cam." Credit: NASA/Goddard
› Go to the Webb-cam
› More James Webb images (Flickr) How often can you say that you've seen the components of a space telescope being worked on at NASA? The answer is probably "rarely, if ever." However, thanks to NASA's Goddard Space Flight Center in Greenbelt, Md., that has now changed.

Web cameras in Goddard's largest clean room are now providing daily, live coverage of work being done on components of the upcoming James Webb Space Telescope. You could say they're "Webb-cams" and they provide one image per minute so people can see what happens behind the scenes. Of course, the work happens during regular working hours, so there may not be action on screen all the time.

John Decker, Webb telescope Deputy Project Manager at NASA Goddard was the motivator in getting the "Webb-cam" up and running. "I thought it would be a great way for everyone to see what happens behind the scenes as components of this exciting new space telescope are being tested and coming together here at NASA Goddard," Decker said.

The Webb telescope project is managed at Goddard, and several components of this next generation space telescope are already in a clean room here.

This panorama shows the inside of Goddard's High Bay Clean Room, as seen from the observation deck. Credit: NASA/Goddard/Chris Gunn
› Larger image

The James Webb Space Telescope is the next-generation premier space observatory, exploring deep space phenomena from distant galaxies to nearby planets and stars. The Webb telescope will give scientists clues about the formation of the universe and the evolution of our own solar system, from the first light after the Big Bang to the formation of star systems capable of supporting life on planets like Earth. The telescope is a joint project of NASA, the European Space Agency, and the Canadian Space Agency and is expected to launch in 2014.

Clean rooms are like operating rooms in hospitals. They are pristine areas kept as free as possible of contaminants that could interfere with delicate technology. There are several clean rooms at NASA Goddard.

Anyone that works in a clean room, such as engineers and scientists, have to wear sterile bodysuits, head covers, gloves, boots, and face masks. It takes about 10 to 15 minutes to get dressed before entering, and it's important because even one speck of dust or a fingerprint could severely damage the sensitive telescope components and instruments. Clean rooms act to filter out these harmful contaminants through a unique ventilation system and an entire wall of air filters.

The clean room ventilation system circulates almost one million cubic feet of air every minute through 9,000 square feet of HEPA filters located along one wall. The HEPA filters are specially designed to last several decades. All of these features provide the largest Goddard clean room with a Class-10,000 rating. That means any cubic foot of air in the clean room has no more than 10,000 particles floating around in it larger than 0.5 microns. A micron is one-millionth of a meter, and typical “outside” air has millions of such particles. A human hair is between 20 and 200 microns wide.

The advantage to the Webb-cam is that the average person doesn't need to do a micron-type clean up and spend time donning protective gear. Anyone can sit at their computer and see what's going on, no matter what they're wearing.